John Lennon and Me Wins at Georgia Theatre Conference 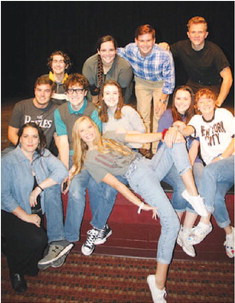 The Lafayette Theatre Company’s one-act version of John Lennon and Me brought four awards home from the Georgia Theatre Conference’s Community Theatre Festival in Savannah, Georgia last week. In addition to winning the 2018 Overall Community Play Festival Award, the cast was awarded Best Actress (Annah Lee), Best Director (Amy McDow), and Spirit of the Road (for backstage cooperation and spirit). The cast will advance to the Southeastern Theatre Conference (SETC) in Knoxville in March of 2019.

John Lennon and Me is told from the viewpoint of an imaginative teenage girl, “Star,” who is battling Cystic Fibrosis (CF), a rare, genetic disease that progressively limits the ability to breathe. The content of the play has impacted the cast in many ways and has led them to continuously promote awareness for Cystic Fibrosis and other illnesses that affect the characters in the play.

Annah Lee explains that “this show shares a very unique perspective of a girl who is living with a fatal disease…she bends and shapes reality however and whenever she pleases. It’s something I think we all wish we could do, but, of course, Star’s fears do catch up with her and she is forced to deal with reality, just like the rest of us. This show has taught me so much, but most of all it taught me to believe in myself.”

This is the first time that the Lafayette Theatre Company has taken a oneact to competition, but students of the academy have attended numerous conferences through the American Association of Community Theatres. “We have taken students to attend state, regional, and international conferences over the past few years and have always been impressed by the educational opportunities available, inspiration provided, and the friendships made in such a short amount of time.” Fisher Brawner shares that “It was an amazing experience to see the progress and accomplishments of our peers from around the state and the learning opportunities in the classes gave me a new set of skills to take to the stage.” “Our participation in the one-act competition brought a new level of value to the experience for us,” explains McDow. “Beyond the constructive criticism provided by the adjudicators, our cast members received feedback from an entirely new audience. Not only was their hard work and talent recognized, but in sharing this experience with other casts from around the state, there was a unifying sense of support and validation for their passion and commitment to this art.”

The next level of competition takes the cast to the annual Southeastern Theatre Conference which is attended by over 5,000 AACT members. In addition to the one-act competition, SETC offers three and a half days filled with hundreds of workshops and classes, featuring professionals from all over the nation. There will also be keynotes, performance festivals, auditions, college recruiting, and networking opportunities for the cast to explore.

Theatre is a performing art that is well-known for its ability to improve students’ professional soft skills and increase marketability for employment. For Lee, “acting is all about perspective. It’s about putting ourselves in someone else’s shoes so that we can understand others and humble ourselves. It’s also shows us that we are not alone.”