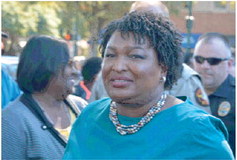 Reporters with the Troup County News were approached by Abrams’ Press Secretary Meredith Brasher prior to Abrams’ speech and were invited to take part in a questionand- answer session between Abrams and the media following the speech.

In her speech, Abrams discussed various aspects of her platform and encouraged those in attendance to vote early. In her request, Abrams suggested her opponent Brian Kemp, who is currently the Secretary of State for Georgia, would suppress Democratic votes if they were cast on Election Day.

“I need y’all to vote early,” she said. “If we all show up on election day, somebody’s going to get away with something.”

Abrams’ comments touch on a question of election security dating back to the 2016 Presidential Election. Kemp’s position as Georgia’s Secretary of State has given the Abrams campaign more fuel, as Abrams has accused the Republican nominee of ongoing voter suppression. Kemp strongly refuted Abrams’ suggestion in their first televised debate last week.

Following her speech, Abrams joined her staff and members of the media beside her tour bus. Reporters from the Troup County News, however, were declined the opportunity to direct questions to Abrams in person, with Brasher citing Abrams’ vocal health as a concern. Abrams was notably hoarse during the speech; however, she seemed to have little difficulty in answering the media’s questions.

When asked why the Troup County News was the sole media outlet denied a question, Brasher replied that questions could be emailed and that Abrams would reply.

At the time of this article, the Abrams campaign has yet to reach out to the Troup County News for comment.

Reporters with the Troup County News had the opportunity to interview Abrams earlier last week when she came by the KIA factory as part of her campaign tour. At the time, Abrams answered questions regarding the minimum wage—which she said she believes should be calibrated on a county-by-county basis— and about who Georgians are and what Georgian values are to her.

The following is a copy of the question as emailed to the Abrams’ campaign. The question echoes a question included in an editorial written in the Monday, October 29, edition of the Troup County News.

“Q: Ms. Abrams, Mr. Kemp released an ad with footage of you saying, ‘When we change Georgia, we change the South.’ As a woman from Wisconsin, do you believe it is right for outsiders of a culture to change the region’s culture even if it displaces the natives? Seeing as your definition of Georgian can include non-natives, isn’t it true that you’re advocating for just that? Is this morally acceptable?”

The question seeks to clarify Abrams’ earlier comments to Troup County News that a Georgian, by her definition, is anyone who lives in Georgia and benefits its economy. As noted, this could include those in the country legally and illegally, and those from out-ofstate looking to take highpaying jobs in Georgia.

This is an unfolding story. Follow the Troup County News for more information. The story will be updated with Abrams’ reply if we receive it.