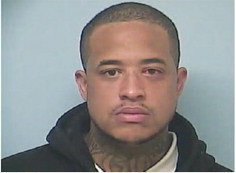 LaGrange Police arrested a local man on several charges while investigating a dispute over an alleged theft.

Friday afternoon about 1:10 p.m., officers with the LaGrange Police Department responded to the 700 block of South Greenwood Street in reference to a dispute.

Officers arrived and spoke with Michael Joshua Eugene Richardson, who stated he was having an argument with another male and claimed that everything was all right now.

The other male still appeared upset, so police made contact with him and he explained his issued with Richardson. He told police that Richardson had a stolen TV in the car that he arrived in, pointing to a red Ford Explorer.

Police then checked the vehicle and determined the tag on the Explorer was registered to an entirely different vehicle. Officers also checked a separate temporary tag on the vehicle, which was determined to belong to yet another vehicle. Eventually, officers checked the Vehicle Identification Number from inside the vehicle and correctly identified the Explorer, which had a canceled registration and no valid insurance.

Richardson was also determined to not have a valid driver’s license, so he was detained after several witnesses advised he had driven to the location in the Explorer.

Police say they had to repeatedly tell Richardson he could not leave while the incident was being investigated and he ultimately had to be taken into custody by force after allegedly obstructing officers.

During a search to arrest, Richardson was found to be in possession of a glass pipe that he personally referred to as a “crack pipe.”

Multiple witnesses on scene told police that Richardson stated that he stole the TV in the Explorer from a family friend in Tuggle Hill. Police attempted to locate the owner of the allegedly stolen television, but they were unable to make contact with the victim.

The television, along with the glass pipe, were seized and taken into evidence for further investigation.

As a result, Richardson, age 34, was arrested and transported to the Troup County Sheriff’s Office where he was booked into the jail charged with Possession of Cocaine, Driving without a License, and Obstruction of Officers.

Richardson is currently being held at the Troup County Jail on $10,500 bond.