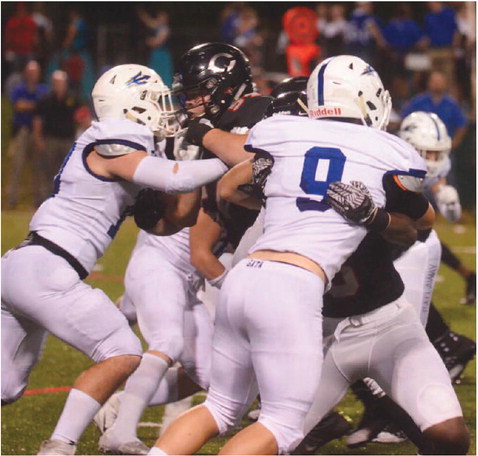 The Callaway High Cavaliers will host the Elbert County Blue Devils at Callaway Stadium on Friday in the first round of the Class AA state playoffs The Cavaliers, who finished the regular season 82, lost to rival Heard County late in the year and enters the state playoffs as the number-two seed in Class AA.

It’s a familiar position for the Cavaliers who have made back-to-back final four appearances.

But this year, they want more.

The pair, who were in competition to score the most touchdowns this season, noted their desire to bring home a championship ring. And for a while, it seemed as though Callaway had little competition. They sailed through tough games against top opponents in the preseason and destroyed a strong 6AAAAAA Opelika team.

Their first loss came mid-season when the Cavaliers fell 37-20 to the Class AAAA Troup Tigers. Callaway rebounded and looked to remain undefeated in their region before losing to the Heard County Braves in the final second of their annual rivalry game.

The Cavaliers will face off against a tough Elbert County team at 7:30 PM on Friday. Elbert County has scored an impressive 343 points this season, for an average of 34.3 a game. This fundamentally matches the Cavaliers’ total of 346 points scored this season.

Callaway, however, has a clear defensive edge. The Cavaliers have fielded a mighty defense this season and have only allowed a total of 109 points in their ten games for an average of nearly 11 points a game.

Elbert County, however, has allowed 150 points this season for an average of 15 points a game. The Blue Devils have a resume that includes a 45-14 blowout loss to Rabun County—a team that fell 13-10 in the first game of the year against Bremen.

In contrast, Bremen fell to the Cavaliers 37-25 earlier this year.

In order for Callaway to make it past the first round of play, they’ll need a strong showing from both Freeman and Bigsby as well as a strong defensive effort. With both offenses averaging a similar number of points, it will be up to the defense to make a difference in the game.