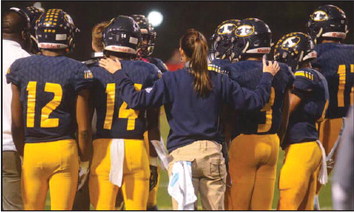 Troup overpowers their foe in the first round of state playoffs.

The Troup High Tigers earned a solid victory in their Thursday night game against Oconee County in the opening round of the state playoffs.

Troup, who came into the game looking to rebound from their first loss of the season in a region championship against Cartersville, entered the game as slight favorites over their Oconee County foes.

The Tigers, led by dynamic quarterback Kobe Hudson and a talented receiving corps, scored twentyone points in the first half but struggled to find their defensive stride. The Oconee County Warriors managed to close the gap to 21-14 by half, and it looked as if the Tigers would enter a tight fourthquarter game. Oconee County scored the first touchdown of the game, but Troup managed to respond with a fouryard touchdown run from Tyree Carlisle to tie the game by the second quarter.

They took the lead soon after with a 60-yard touchdown pass from Hudson to Joko Willis.

The score put the Tigers in familiar territory, as they have dominated games by taking early leads throughout the season.

The game looked on the verge of a blowout when Troup’s King Mwikuta added to the lead by forcing a fumble and allowing Andy Boykin to return it for a touchdown for the Tigers.

Up 21-7 in the second quarter, the Tigers needed a defensive effort to keep the Warriors down. Oconee County would soon, however, march their way down the field for a touchdown before half.

The score proved controversial, as the refs missed a blatant push-off by one of Oconee County’s wide receivers, prompting an angry response from Troup Coach Tanner Glisson.

The Tigers would respond in the third quarter with a 17-yard touchdown run from Carlisle. Up 2814, the Tigers sat with double the Warriors’ score.

Things for a little crazy, however, when Oconee County returned the following kickoff for 88 yards and scored a touchdown to put them back in the game.

Fortunately for Tiger fans, it would be Oconee County’s last score of the game.

The score could have been worse, with Glisson showing mercy and opting to let time expire instead of taking a final few chances at the goal line.

It was a strong return to form for the Tigers who have been having a record season so far. Now 10-1, the Tigers’ only loss came to powerhouse Cartersville in a 43-10 blowout last week.

Troup will play Pickens County in the second round of the playoffs later this week.