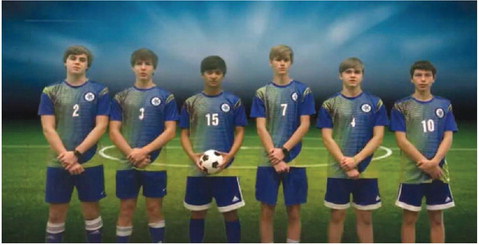 They’re not your average Sea Turtles.

“Most turtles are found in the sea,” they say in the opening of their national championship introduction video. “But we’re not normal sea turtles.”

“We play on a sea of green grass.”

The fifty-seven-second video, made by Mr. Evans at LaGrange High, introduces viewers to the members of the Sea Turtles’ national title team.

The Sea Turtles, led by LaGrange boys soccer coach Shane Pulliam, put together an incredible showing this summer, as players learned the fundamentals of 3×3 soccer and competed in nation-wide tournaments.

Despite being beginners in the sport, the Sea Turtles managed several top-three finishes, with two separate Sea Turtles teams defeating Atlanta United squads to face off against each other in one tournament championship.

Now the Sea Turtles, who are ranked first in their age group in some national 3×3 polls, are looking to put an exclamation mark on their inaugural 3×3 season with a national championship victory in Memphis in two weeks.

The tournament will be held from November 24-25, with team members, including freshmen Tripp Hollstrom, Noah Whiple, and Miller DeVane; sophomore Ander Gay; and juniors Jack DeVane and Griffin Sanchez.

“We’re from LaGrange High School in LaGrange, Georgia,” the Sea Turtles, all sporting their custom-designed green-and-blue jerseys, say in the video.

“And we won a national championship in football,” they say in reference to the Grangers’ 1991 national title.

“And we’re coming to Memphis to win another,” they add in closing.

“But this time, it’s real football.”

It will certainly be a challenge for the Sea Turtles to pull off the victory, but the team has the talent to do it. With several players returning from tournament-winning teams, the Sea Turtles boast a talented roster.

As they enter the championship tournament, the Sea Turtles will have to overcome the fact that they haven’t faced competitively in tournaments since earlier this year.  However, with many of the players remaining active in both high school and club soccer, the team has managed to stay in shape.

If the Sea Turtles win, it won’t be Pulliam’s first 3×3 national-title winning team—but it will be Troup County’s first. The 3×3 variation of soccer, brought to Troup County this year by Pulliam, has allowed several players to face tough out-of-area competition in a style of soccer that forces players to focus heavily on their technique and execution.

The long-term benefits are yet to be seen, but with the team also playing for LaGrange High, it may just be that the Grangers enjoy another strong season this year. Last year with Pulliam as a first-year head coach, the Grangers were able to nearly double their offensive production and made it to the second round of the state playoffs. A championship title by the Sea Turtles would bode well for the Grangers, and with many of the players still young, may suggest a positive outlook for the program for years to come.

Follow Troup County News for more updates on the Sea Turtles’ national championship journey, including an exclusive interview in our Friday edition!