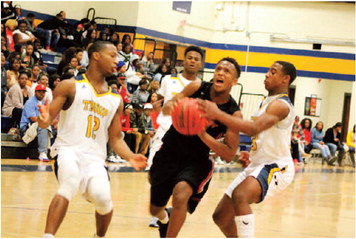 Everyone in the gym knew who the better team was on Saturday night after Troup High demolished Callaway, 67-42 in a boy’s basketball showdown. To say the least, it was thorough, Tiger style.

“We were just the better team. We have good players, and we stepped it up,” said Tigers senior guard JaQuavo McFarland.

Callaway High got all that Troup had to give, from the first period on. The Cavaliers were in a basketball fog. The Troup High boys were not.

The Tigers came out shooting and making. Troup High grabbed the game by the throat in the first eight minutes of play. Before the Cavaliers could blink, they were in a 12-0 hole.

Troup High played some devastating basketball with Qua Johnson’s three-pointer, to be followed by some more heavy artillery from Mc Farland. He knocked down two three-point baskets. They went down like a pill with store-bought water.

Junior center Andy Boykin of Troup High contributed a layup for a 14-2 Tiger advantage. Troup High junior guard Gabe Cofield added to the Cavalier misery with a three-pointer. Antinez Blount, a junior forward, scored for Callaway High on a layup.

But the Cavaliers still got outscored, 22-6 in the first quarter. Callaway High did get a bucket from sophomore guard Ja’Vante Boddie with 7:19 left in the second period. Troup High was unphased by it all as it went back to its basketball bag of tricks with a Boykin lay-in for a 28-8 Tiger lead. Troup High led by 22 points at the end of the first half.

The Tigers almost had the game on ice, but they continued to play like it was a hotly contested game. It was not. Troup High junior center Isaiah Cox rolled inside for a layup and a 38-17 Tiger advantage with 5:59 remaining in the third period.

McFarland drove the ball as well for a pair of layups. The Tigers widened their lead to 4217. Troup High junior guard Jarell Smith drained a three-pointer before the end of the third quarter.

The Tigers were riding high and riding often.

“We played with intensity. We were in the right spot, and we were having some fun,” said Coach Blake Craft of Troup High (6-1).

In the fourth quarter the Tigers still had the touch with a Camren O’Neal putback, as well as an O’Neal five-foot jumper, a Trey Williams layin and an O’Neal 10-foot jumper.

Junior forward Duke Simpson scored for Callaway on a layup late in the fourth period. The Cavaliers had the longest of nights, but Antinez Blount did leave with 11 points. Demetrius Coleman scored nine points for Callaway High, and Simpson pumped in eight points.

Troup High had some hot hands, too, with McFarland and his 11 points, Smith and his 10 points, and a pair of Tigers, Cofield and O’Neal, who finished with eight points each.