Sea Turtles Compete for Chance to Train in Germany 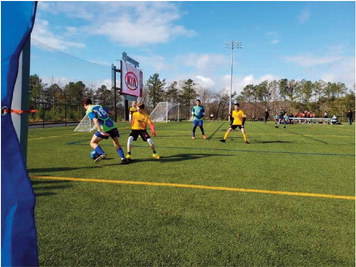 The Sea Turtles are no strangers to high-stakes competition.

Coming off a strong showing in the 3×3 National Championship in November, the Sea Turtles returned to action this past weekend for another bigname contest. And this time, there was more than just a national title on the line.

The two-day competition kicked off Saturday under the direction of professional coaches from FC Schalke 04 from Germany. Tournament champions would go on to win a free trip to Germany to train in one of the country’s best youth academies.

For Sea Turtles Coach Shane Pulliam, who also coaches the LaGrange High boy’s team, the competition was another opportunity for his players to grow.

The Sea Turtles, who fielded only one player from their national championship lineup, fought to a 2-1 record to make it to the second day of tournament play. But they found themselves two players down Sunday as they took on the Spartans from North Carolina and ultimately fell 53.

“It’s not where we wanted to finish, but as long as we learn from it, it’s worth it,” said Pulliam after the game.

The Sea Turtles’ abrupt tournament defeat came after the team rebounded from an opening loss for 12-2 and 5-4 victories.

Short two players coming into Sunday’s match-up, the Sea Turtles had to fight against an almost insurmountable disadvantage.

“We did well with what we had,” Pulliam said. “[But we knew] going into Sunday with four was going to be a challenge.”

The long-time coach continued to emphasize his focus on player development.

“It’s about learning and getting better,” he said.

And his players certainly have since he founded the Sea Turtles team this summer. Pulliam, who has had a successful career in 3×3 coaching, took the Sea Turtles from zero 3×3 experience to defeating Atlanta United teams for tournament championships in less than two months. Against all odds, the Sea Turtles would eventually rank first in their age group by some polls and would go on earn an invitation to compete in the 3×3 National Championship.

You can’t ask for much more in a team’s inaugural season. Now, as both Pulliam and the players look ahead to the Sea Turtles’ 3×3 future, they also have begun to concentrate their focus on the upcoming La-Grange High soccer season.

With five of the eight teams from the top of their division on their schedule, the Grangers will face an uphill battle when their season kicks off in February.

“We have to learn to be lethal and have a killer instinct,” Pulliam said.

The Grangers are looking to improve on their impressive performance last season, and with several Sea Turtles on the roster, they certainly have a shot.