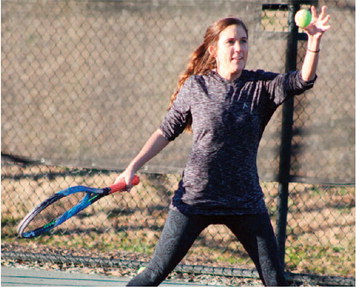 There was some tennis for the taking and some points up for grabs.

But most of all, there was some family pride on the line in a pair of doubles matches on Christmas Eve at the McCluskey Center in LaGrange. Shots were taken, good-natured ribbing occurred and victory was claimed by 24year-old Cassidy Kemp and 25-year-old Garrett Cole.

They swept the doubles matches in relentless style on a frosty afternoon on the tennis courts.

“We communicated well, and we were pretty quick. I liked it at the net, and I used my backhand (shot),” said Cassidy Kemp.

Her tennis partner, Cole, considered these matches genuine. Cole and Kemp were playing for more than just fun and water breaks.

“We wanted it more. We had more skills. We had the mental toughness,” said Cole.

Cassidy Kemp and Cole beat the mother-daughter doubles team of Jill and Savannah Kemp. There were tennis witnesses, along with Santa Claus and his full complement of reindeer.

“I’m addicted to tennis. I take lessons. This is good exercise, and tennis is a social team sport,” said Jill Kemp.

There is more to it than even that.

“This is an adrenaline rush, and we are having fun,” said Jill Kemp.

Her teammate and daughter, Savannah Kemp, was out there to compete as well. And talk some tennis trash.

“I just try. I get excited, and I like to win. It’s all in fun,” said Savannah Kemp.

And according to this 27-year-old doubles player, “I like being with my family (out on the tennis court).”

Particularly on Christmas Eve at the McCluskey Center.