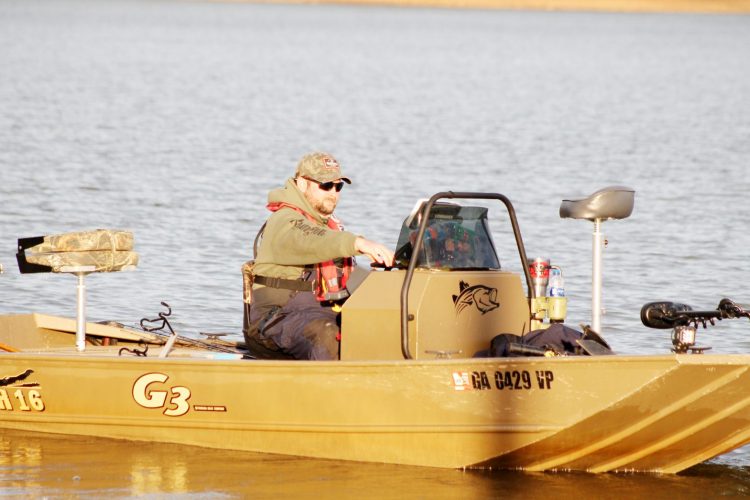 So much for the bone-chilling wind, the red noses and the goosebumps.

It was still a good day on West Point Lake for fishermen and best friends, Dustin Pate and Tyler Hubbard. They used their fish finder with precision as they pulled in nine hybrid bass and stripers last Wednesday morning and afternoon.

Some of their striped bass weighed up to four pounds each. The hybrid bass got as big as 2.5 pounds for Pate and Hubbard. They fished for six hours the day after Christmas.

“We caught pretty much all of our bites. Most of the fish were in 18 to 20 feet. For hybrids and stripers this lake is pretty good,” said Pate.

He and Hubbard fished with 8-pound test line, and they released all of their catches.

“We had a nice morning. The fishing was fair to good,” said Hubbard.

He and Pate made all of their catches with artificial lures. Steve Cromer of La-Grange had a successful fishing party on West Point Lake, too.

Cromer, and his 12year-old son, Garrett, and his fishing pal, Russ Stephens, reeled in six spotted bass and hybrids. Their largest fish weighed around 2.5 pounds. The three anglers were fishing and catching with crankbaits and Trick Worms.

“We were trying to fish the rocks. It was windy with clear skies, and the water temperature was 57 degrees,” said Cromer.

One 3-pound largemouth bass was lost, but there would be other fish to catch for the three anglers.

“We had fun. You just need confidence,” said Garrett Cromer.

Stephens did some casting and waiting, too.

“I like getting outdoors and stuff,” said the 13year-old Stephens.

Steve and Donna Johnson of Forsyth gave West Point Lake a shot as well. The husband and wife team fished for three hours with crankbaits. The Johnsons caught nothing except a stiff breeze.

“The barometer took a dive. A cold front was coming through, and that shut them off,” Steve Johnson said of the West Point Lake bass.

Johnson was surprised with a fish-less day on the lake.

“We thought we’d catch (at least) a couple of fish,” said Johnson.

He and his wife were fishing in 12 to 20 feet of water. In years gone by the Johnsons have caught a 15-pound striper and a 8.9-pound large-mouth bass on West Point Lake.

The fishermen were out on West Point Lake last Wednesday afternoon. The bass were biting for most of the anglers.