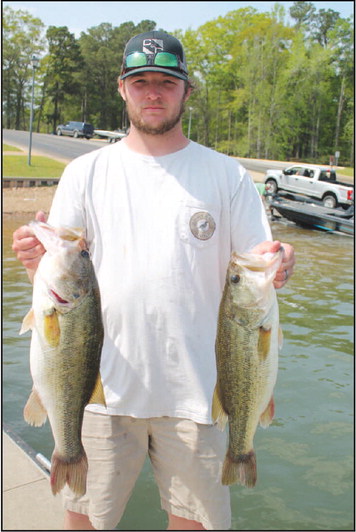 The odds were not with Ben Williamson and Ryan Lloyd.

There were 90 teams and 180 fishermen in Sunday’s West Georgia Bass Club Tournament. Williamson and Lloyd won the tournament anyway. They out fished 89 teams, and they outsmarted a lake full of bass.

Williamson, the Bowdon angler, and Lloyd, the Carrollton fisherman, were the first place team with a total of 19.74 pounds of fish. Williamson and Lloyd weighed in five portly largemouths at Pyne Road Park.

And the rest is West Georgia Bass Club history.

“We fished fast, and we covered water until we found the right area,” said Lloyd.

“We found the right area. We were patient, and we had lots of luck. We’re experienced (fishermen),” said Williamson.

He and Lloyd also caught the “Big Bass” of the tournament. That fish, a largemouth, was a six-pounder. That catch paid out $620.

Lloyd and Williamson also won $1,325 for finishing first in the tournament. The second place fishermen, Jon Estes and Justin Wood of LaGrange, were on the fringe of winning with 18.89 pounds of bass.

Wood and Estes won $650. They fished in four feet of water, catching bass as big as five pounds. Estes and Wood had no complaints.

“We caught all big ones,” said Wood, who fished with a Senko lure.

“The fish were hungry and moving. We put the time in. We could feel the adrenaline,” said Estes.

Mike Squires of Atlanta caught some West Point Lake bass, too. Squires’ best hook up was a fivepound largemouth.

“I was just fishing, and it was really good. He just bit,” said Squires.

He was fishing at a depth of 10 feet.

It was a pretty good day of fishing for Dan Lavoi and his wife, too. They nabbed third place in the West Georgia Bass Club Tournament. Team Lavoi from Rootville netted $425 with a total weight of 18.84 pounds of fish.