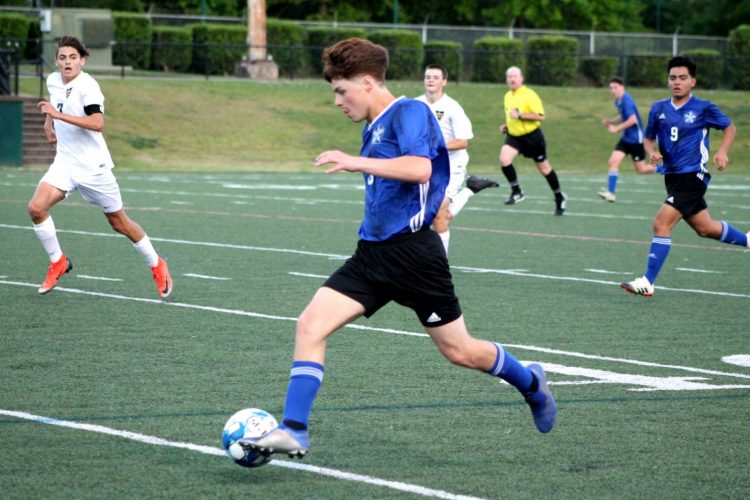 If he had it to do all over again, Josue Recinos wouldn’t change a thing.

The junior striker for the Grangers lit the fuse, which burned all night long, as LaGrange High beat North Oconee, 3-2 in the opening round of the Class AAAA Boys State Soccer Tournament on Friday evening at Callaway Stadium.

It was Recinos who scored the first goal of the playoff game. Recinos hit the bullseye with a 10-yard goal with 18:19 remaining in the first half. The LaGrange High boys scrambled to a 1-0 lead.

The Grangers never looked back. Old Mo was on their side. LaGrange High had the momentum just about all night.

“We scored early. We were passing, and we were intense,” said Recinos.

The only thing better than a 1-0 lead in the state playoffs, is a 2-0 lead. LaGrange High busted loose for that two-goal lead after getting a five-yard score from junior forward John McDonald with 30 seconds left in the first half.

North Oconee was hurting and trailing.

“They were playing the ball over the top, and our defense couldn’t get back. We made a lot of defensive mistakes,” said North Oconee senior midfielder Jaxson Durante.

The Titans did come back and close the gap in the second half. North Oconee scored twice to take the game down to the thumb-scratching end. The Titans got both of their goals from senior forward Calvin Koslowsky, the first of which was a five-yarder with over 28 minutes left in the game.

North Oconee was back in the hunt as the Titans reduced the LaGrange High lead to just 2-1. The enthusiasm level for the team from Bogart, Ga. went sky high.

“I saw an urgency and a passion. Some of us got emotional,” said Alex Ventura, the head coach of the Titans.

What LaGrange High did after that was dial up some more offense. With 24:13 left in the game, senior midfielder Jimmy Cancino of the Grangers gave his team a shot of confidence.

Cancino scored from eight yards out. The LaGrange High boys were sitting pretty with a 3-1 advantage. The momentum was all the way back for the Grangers.

“We trust our coach (Shane Pulliam). We wanted this more (than the Titans),” said Cancino.

LaGrange High still had to withstand a parting shot from North Oconee. The Titans scored one final time on a four-yard goal from Koslowsky with 36 seconds left in the State Tournament match.

Koslowsky, the Titan soccer star, was injured on the play, however. He went down with an ACL tear. North Oconee was fixing to be 8-9-1 on the year and out of the state soccer playoffs.

LaGrange High ran out the clock, and the Grangers enjoyed every tick of the stadium clock. Pulliam was leading the cheers from the LaGrange High bench.

“We kept fighting, and North Oconee is a solid team. Our guys are starting to believe that we can win this whole thing (the state championship),” said Pulliam, the head coach of the 14-3-2 Granger boys.

LaGrange High goalkeepers Butler Evans and Jack DeVane finished the game with 11 saves. They got their uniforms dirty for 11 good reasons. Evans had seven saves, and DeVane was credited with four saves.