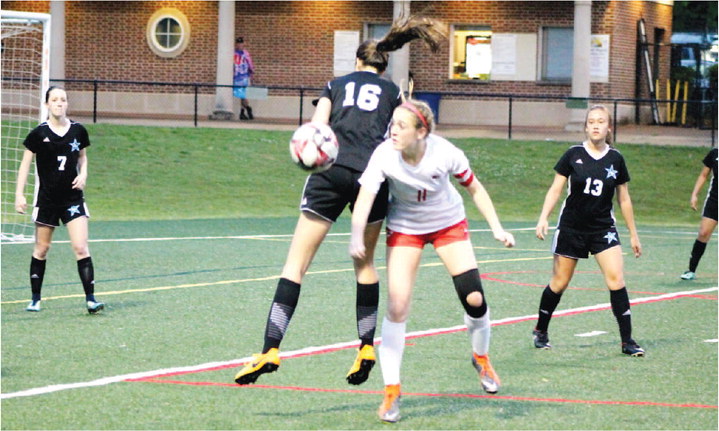 It was never meant to be easy, and it wasn’t.

LaGrange High School had to work hard for a 2-1 win over Stephens County on Thursday night in the first round of the Class AAAA Girls State Soccer Tournament. The Lady Grangers survived a weather delay and some April showers at Callaway Stadium.

But according to La-Grange High assistant coach Andy Fritchley, “We like the rain.”

The Lady Grangers also prefer winning in the soccer playoffs. The game was in doubt until the final minute of play. It took some solid second half defense, along with a few elbows and the occasional grunt until the Lady Grangers put this game in the win column.

“We played hard, and we had some good touches. We passed it,” said LaGrange High junior midfielder Anna Doerr.

For LHS and Doerr, their one-goal lead was shaky. Stephens County very nearly hit a 40-yard shot from junior midfielder Isabella Morrow at the halfway mark of the second half. The ball scraped some paint off the top of the goal box.

The Lady Indians almost tied the game again with an 18-yard scoring attempt from sophomore forward Liz Adams with 5:13 left in the State Tournament game. The Lady Indians were unlucky.

Her girls, 8-8-1 on the season, did silence the Lady Granger crowd with a goal late in the first half. The only Stephens County goal of the game was a seven-yard score off the toe of sophomore forward Gabby Morrow.

At the 8:07 mark of the first half, Morrow deadlocked the soccer match at 1-1. It was a battle of the fittest and the best from then until the final whistle of the night.

“We played a lot of team ball, and we fought hard. We passed well. It was hard to keep control (of the ball in the rain),” said the 5-foot-3 Morrow.

LaGrange High eventually won the game because of the Lady Granger contagious defense, the ability to distribute the ball and some booming soccer shots from junior striker Caroline Thompson.

She scored one goal in the first half and hit home with another goal in the second half. Thompson put her golden touch on goals from six yards and 25 yards. LaGrange High coaches Colin Ross and Andy Fritchley were appreciative of her effort and the entire Lady Granger team.

This was a team victory in the first round of the state playoffs for La-Grange High.

“We were prepared. We kept pounding. We showed some composure. We have a lot of playing experience. Rachel (Harry) did not get rattled,” said Fritchley.

Harry, the Lady Granger goalkeeper, got off her feet for a total of four saves. She is a LaGrange High sophomore.

“Rachel was moving and sliding. Everything feels different (in the State Tournament),” said Fritchley.

The Lady Grangers are now one game wiser with a record of 12-6-1. La-Grange High will move on to the second round of the state soccer playoffs this coming Wednesday with a home game against Blessed Trinity (12-3-1) from Roswell.