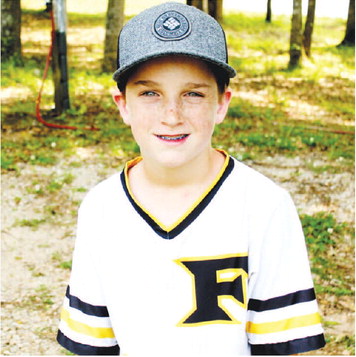 If you’ve seen one bass, you have not seen them all.

The largemouth and spotted bass are scattered around West Point Lake like sprinkles on top of an ice cream cone. Get a napkin, please. Most country boys and girls have a craving for bass fishing and ice cream. David Shriver of Meansville, Ga. (Pike County) is no different. He was back on West Point Lake last weekend in search of anything that bites.

Shriver found something. He rigged his fishing line with a Spinnerbait and let the lure go to work. Shriver got a hit. A few minutes later he had a bass of the largemouth variety.

Every angler has a story to tell. Shriver does, too.

“I thought I was hung up for a second. Then the fish came out of the water. It was luck,” said Shriver.

Besides luck, it was also a seven-pound largemouth bass. It was a keeper.

He also caught a twopound spotted bass, once again with the Spinnerbait. Both of Shriver’s catches came in four feet of water. “We love fishing. We like spending time on the water,” said Chad Hawkins, a fine-feathered fishing friend of Shriver.

Hawkins is also from Meansville, a town of less than 200 residents. Trent Key calls a different place home. Key, an 11-year-old fisherman, is from West Point.

Key headed to the lake last Sunday as well. He, too, had some fish and some luck. They went hand-inhand as Key caught four bass, both spots and largemouth from two pounds on up.

“I was fishing shallow with a Red Lizard (lure). It was fun. When I see my rod go down it makes me feel good,” said Key.

His rod was bending time after time last weekend. Key caught fish as early as 8:30 a.m. The early-riser does get the worm. It’s true.

One of the first fish that Key caught last Sunday morning was a six-pound largemouth bass, hooked on West Point Lake.

“He pulled and jumped in the air. And he kept pulling. It felt amazing. That is one of the biggest bass that I’ve ever caught,” said Key.

Although a young fisherman, he did give some advice.

“You have to use the right lure,” said Key, the fifthgrader from West Point Elementary School.