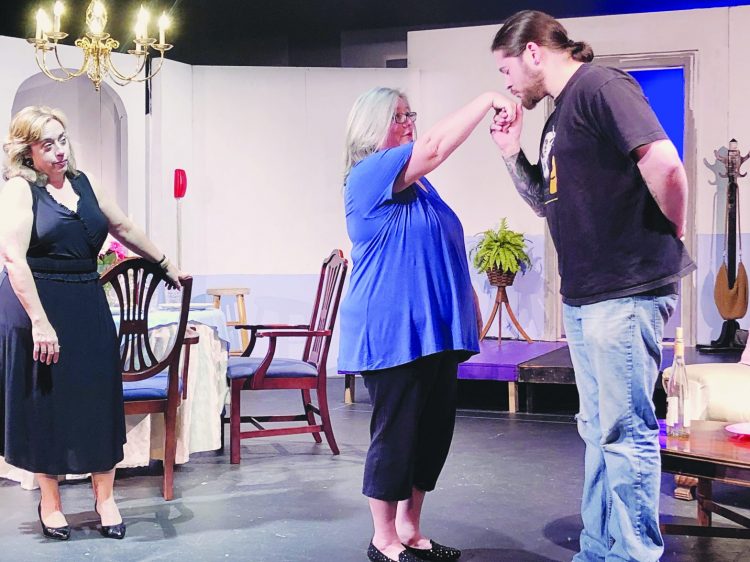 Unger and Madison are at it again! Florence Unger and Olive Madison, that is, in Neil Simon’s female version of The Odd Couple. Opening Thursday, May 2nd at LSPA’s Lafayette Theatre Company’s Black Box, Simon’s hilarious contemporary comic classic once again pits slob versus neatnik as two old friends try to happily reside in the same apartment.

Simon’s original play with male leads first appeared on Broadway in 1965. His characters were revived for a successful 1968 film and a television series in the 1970s. “Several of us grew up watching The Odd Couple on TV,” says Carol Cain, who is one half of the odd couple along with Melissa Stanley. “It has been a fun challenge to take on this updated version knowing that there will be people in the audience who remember and love the original male characters, yet there will also be audience members who are experiencing this story for the first time, appreciating Florence and Olive without even knowing Felix and Oscar came first.”

Gone is the men’s poker night! Florence and Olive, along with their best gal pals, play Trivial Pursuit and discuss love and loss over their weekly games. Director Kelly Finley has her cast begin each rehearsal playing a round of Trivial Pursuit to get them in the mood. And just as the characters do in the play, the actors quickly become competitive, and good-natured bantering follows. “Playing the game before rehearsals creates camaraderie,” says Finley. “The nature of the show hinges upon the relationships of these women.”

The game night gals are played by actresses who have all been on the LTC stage in previous productions. LaKae Ford is Mickey, Cathy Hunt is Renee, Elissa Lawson is Sylvie, and Mollie Fitzsimmons is Vera. And while these gals may frequently put each other down in the course of the play, they ultimately pick one another up. “The Odd Couple is a story of ever changing and enduring friendship,” says Finley. “Lucky for me, my cast embodies that theme. Some of them have been friends for over thirty years.”

Rounding out the cast are Roy Rashall and Randy Powell who portray would-be romantic neighbors, the Costazuela brothers. Powell has been seen on stage at LTC many times, but this is Roy’s debut performance. “It’s intimidating being around all these experienced actors but I have learned a lot and have had a great time,’ Rashall said.

“It’s classic Neil Simon with lots of laughs,” said Stanley. “This is the perfect girl’s-night-out show, Mother’s Day gift, or date night. If you’re looking for fun, join us for this show!”

LTC’s Black Box Picnic Theatre is located at 214 Bull Street in downtown LaGrange, Georgia. The venue offers an intimate setting with 96 seats divided among tables, allowing guests to provide their own food and drinks for a meal before and during the show. The house opens one hour before performances. Concessions are available at each show, with a light bar added during mainstage/adult productions.

Individual tickets are $17 for adults and $12 for students, with season tickets also available. Tickets may be purchased online at www.LSPARTS.org or by calling 706-882-9909.