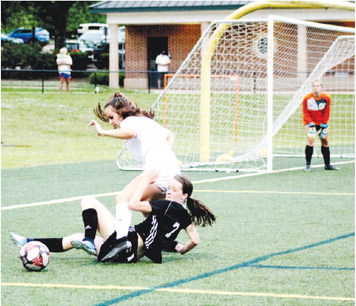 The early momentum was there for the taking.

LaGrange High let some early scoring opportunities go by the board and went on to lose to Blessed Trinity Catholic, 6-1 in the second round of the Class AAAA Girls State Soccer Tournament on Wednesday night at Callaway Stadium.

So much for the home cooking. The Lady Grangers missed early and did regret it later. It could have been a totally different kind of soccer match.

LaGrange High had a chance to take a 2-0 lead in the first three minutes of the game. It did not happen. Lady Granger sophomore Sydney Ormsby missed on a penalty kick very early on.

Junior striker Caroline Thompson of LaGrange High couldn’t score on her 10-yard shot in the opening minutes of the game either. Almost was the theme of the night for the Lady Grangers.

They almost scored on a 40-yard bomb off the foot of Ormsby with 1:48 left in the first half.

The Lady Grangers were stuck in neutral on offense. LaGrange High could have scored countless goals, including a Thompson 15-yard shot that could have gone in. But didn’t at the 29-minute mark of the second half.

“Sometimes it is not your night. Blessed Trinity was fast, and we didn’t get back (on defense),” said Lady Granger senior midfielder Katelyn Peters. “I’m still proud we made it this far (in the State Tournament).”

Blessed Trinity took advantage of all of those missed shots from La-Grange High. The Lady Titans caught some breaks, and they scored some goals. Once they started, they could not quit. And didn’t.

Senior Juliauna Bouknight led the Lady Titans to water and made them drink. Bouknight scored the first of many goals for Blessed Trinity. Bouknight dribbled on through for an eight-yard goal with 27:58 left in the first half.

“We crashed the box. We were faster than them. We came around from the side,” said Bouknight.

The Lady Titans calmed their nerves and moved in front, 1-0, with the Bouknight goal. It was Blessed Trinity’s game from that point on. The Lady Titans flushed the

LaGrange High net with an array of goals in the first half.

Blessed Trinity from Roswell played some intimidating soccer with a tackle here and a goal over there. The Lady Titans took the game over with a 4-0 first half lead. Blessed Trinity got the ball to the scorers, including freshman Grace Eatz, and junior midfielders Taylor Rish and Zoie Zarganski.

They all scored in the first half for the Lady Titans.

“We have a lot of quick players and a lot of young players. We had good leadership, and we played our game. We did our work,” said coach Kate Halliburton of Blessed Trinity (133-1).

The Lady Titans scored two more convincing goals in the second half. Zarganski rifled the ball in from 12 yards out. Blessed Trinity also scored its sixth goal of the state playoff game on a sinfully sweet Taylor Rish 15-yard goal.

LaGrange High could not get a handle on the Lady Titans.

“They are incredibly well coached. They are young, quick and ruthless. Our seniors are disappointed (with the playoff loss). We need to be more organized (next time),” said Colin Ross, the head soccer coach of the 12-7-1 Lady Grangers.

LaGrange High did avoid a shutout with a 20yard goal from Caroline Thompson with 5:29 left in the match. The Lady Grangers did not wave the white flag.

“We worked hard in the second half. We have a special team. We’ve won the region three years in a row,” said Ross.

Blessed Trinity Catholic was still five goals better than the Lady Grangers on Wednesday night in the second round of the state playoffs. That is a soccer fact.