Police Looking for Suspect who Shot at Good Samaritans 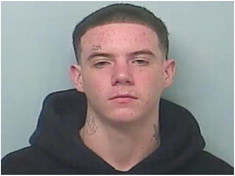 LaGrange Police are looking for a man on several felony charges after he allegedly fired gunshots at a pair of Good Samaritans who stopped to intervene in an altercation he was having with a female.

Thursday evening about 6:40 p.m., officers with the La-Grange Police Department responded to the area of Lanett Avenue upon reports of gunshots being fired into an occupied vehicle.

Officers arrived and spoke to the complainants, who stated they stopped their vehicle in the 100 block of Auburn Avenue to intervene in an altercation between a male and a female. When they stopped, the suspect, described as a white male with tattoos, fired multiple gunshots into the Honda Accord they were driving.

The victims told police they then immediately fled toward Lanett Avenue to get away from the shooter.

The suspect then reportedly left the scene in a grey Ford Mustang.

Police were subsequently able to identify the shooting suspect Jacob Tarwater, a previously convicted felon. The grey Ford Mustang was later located at a residence on Cooley Road, but Tarwater was not at the location.

This incident is still under active investigation by the LaGrange Police Department Criminal Investigations Section.