Police Arrest Suspects with Stolen Vehicle and Guns, One Still at Large 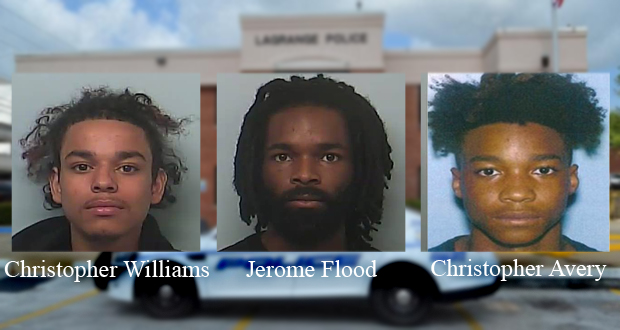 LaGrange Police have arrested two suspects and are looking for one more who were caught fleeing from an Entering Auto incident in a stolen vehicle.

Wednesday morning about 2:30 a.m., officers with the LaGrange Police Department were called to Lee’s Crossing Apartments on Old Airport Road upon reports of an Entering Auto in progress. When police arrived they spotted a white Dodge Charger speeding away from the location. Officers were quickly able to verify that the occupants of the Charger had been involved in the Entering Auto because the car that had been entered was under surveillance due to vehicle break-ins in the area.

Police attempted to stop the vehicle, but the vehicle continued to flee onto the highway. Officers later utilized a pursuit intervention technique to stop the Charger and end the chase as the vehicle traveled south on Interstate 85.

During the subsequent investigation, police located another of the suspects, Jerome Flood, at a gas station on Lafayette Parkway after a suspicious male matching the description of one of the suspects came in asking to use a phone with grass in his hair.

With the assistance of Carrollton Police Department, detectives were later able to identify the driver of Dodge Charger as Christopher Avery.

Police recovered three firearms from the Charger that had been reported stolen out of LaGrange, Atlanta, Cummings, Georgia, along with other property that was stolen from the LaGrange and Carrollton.

The Dodge Charger was also reported stolen from Lithonia, Georgia.

Williams, age 18, and Flood, age 25, were arrested and transported to the Troup County Sheriff’s Office where they were booked into the jail charged with Entering an Auto, eight counts of Theft by Receiving Stolen Property, and Obstruction of Officers.

Warrants were issued for Avery’s arrest on similar charges in addition to numerous traffic offenses. He remains at large as of press time.

If anyone has any further information on this incident or the whereabouts of Christopher Avery, please contact the La-Grange Department at 706-833-2603. Anonymous tips can be submitted to the Troup County Crime Stoppers at 706812-1000. Tips can also be submitted through the La-Grange Police Department’s Facebook page.