Humphries Runs into the Top 10 at Lafayette Cross Country Invitational 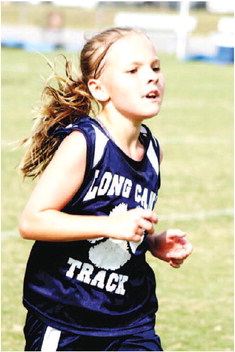 She is small in stature and big in heart. She conquers her fears. She gives everything that she has with every grunt.

Humphries, the sixthgrader from Long Cane Middle School, has promise and potential when it comes to cross country running. At 11 years old, Humphries is a rookie on the hills and through the valleys.

But she has a burst and a certain drive. Humphries doesn’t quit, and she certainly doesn’t walk when she gets tired. Humphries ignores the pain and keeps on going.

She did that for 1.8 sweaty miles as she finished 10th in the Lafayette Christian School Cross Country Invitational on Tuesday afternoon. Humphries smiled through the pain, the agony and the sunshine. She ran the 3K race with a time of 14:25.

“I was challenged mentally and physically. I ran with passion, and I tried my best. I prayed (a lot),” said Humphries. “I’m building stamina and endurance.”

Anna Beth Kinnersley of LaGrange Academy ran in the girls 3K, too. She churned and burned all the way for a time of 14:28.

“I had a good pace. I ran up some big hills and through the woods. My heart rate went up,” said Kinnersley, the eighthgrader for the Lady Warriors.

“Our kids are coachable, and they have a lot of energy. They have that joy of competing,” said Klinger.

Gardner Newman Middle School got into the hunt and very much into the girls run as well. The Lady Mustangs had a pair of Top 10 runners with Alyssa Rhaney and Alexis Wingenbach. Rhaney was on the clock at 14:02.

Wingenbach followed with a time of 14:14. Gardner Newman won the girls invitational championship with 71 points.

“We showed out and won. We had teamwork,” said Rhaney.

The Gardner Newman girls also had their coach, Brad Morman, urging them on.

“They’re not just runners, they are also competitors. We train daily. Our girls are dedicated to the sport,” said Morman.

St. Anne Pacelli Catholic from Columbus finished second in the girls race with 89 points. Calvary Christian, also from Columbus, won the boys middle school championship with a score of 94 points.

St. Anne Pacelli Catholic placed second with 98 points. Jose Rosa of Faith Academy from Loganville was the boys medalist with a first-place time of 11:26 in the 3K run.

The highest local finisher was Noah Outland from Gardner Newman. Outland, a sixth-grader for the Mustangs, had a fourth-place time of 12:39.

“I was showing people what I can do. I was competing. I pushed myself, and I passed a couple of people,” said Outland, the 12-year-old runner.

Javon Harris of Gardner Newman sprinted into 10th place. He was on the clock at 12:51 in the boys race.

Lafayette Christian was in the crowd and on the race course, too. Walker Hudson put up a time of 17:19 for the Cougars. Hudson is an eighth-grader.

Karson Pearson ran tough and to the end as well for Long Cane Middle. Pearson got his finish line water and a much-deserved rest. But that was only after running around on the muggy race course for 1.8 miles.

“I kept up the pace. It was hilly and easy to trip. I’m real tired,” said Pearson.

Tommy Murphy Staff Writer LaGrange Police have arrested an alleged shoplifter on an additional felony charge after she was found with a bag of suspected methamphetamine and a plethora of credit cards. Saturday afternoon, officers with the LaGrange Police Department responded to Walmart on New Franklin Road in reference to an unwanted person. Police were told that employees had been...

All schools in Troup County now have a trained and certified full time nurse on staff thanks to the...

All Children in Troup County Set to Receive Free Meals

Thanks to an extension from the Seamless Summer Option program, all Troup County youth ages 18 and...

Tommy Murphy Staff Writer LaGrange Police have arrested one subject and issued an arrest warrant for another after the duo allegedly stole a man’s car while driving him to an auto parts store. The investigation began Friday morning, about 8:23 p.m., when officers with the LaGrange Police Department responded to Advanced Auto Parts on New Franklin Road in reference to reports of a stolen...

Donald Boyd Publisher Two weeks before I got married in 1972, I was fired from my truck driving job. I was about to be on my own with my sweet wife to be—without a job. This is not the way I wanted to start my life as a married man. My future wife was at our church in a white Bible ceremony, and I had to tell her that I had just been fired from my job, and I had very little money to pay...