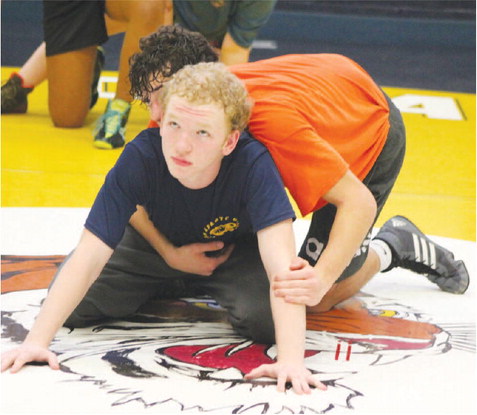 To be quite honest, the Tigers are on the ground floor of a major rebuilding project. They own that.

The Troup High wrestlers are a young team and a thin one, at that. The Tigers have no depth with just 10 wrestlers. Troup High has only two senior grapplers – with 145pounder Mason Lumpkin and heavyweight Michael Irvin.

What the Tigers do have is a vision and a new head coach with the upbeat Drew Garner. Troup High wrestling is trying to plant a seed and grow a giant.

“We are teaching intensity. We’re teaching how to drill. We are teaching fundamentals. I want everything that they have to give and more,” said Garner, the former state medalist for the Tigers.

With a little luck and a lot of sweat, Troup High has the potential to be what they once were. A state championship wrestling program.

“We want to put the 10th banner on the wall,” said Garner. “We are a work in progress. We’re teaching the mental approach and the technical side. I plan to be here for a long time.”

What Garner wants this year from his rebuilding wrestling program is “a no fear, no quit mentality.”

The 1-13 Tigers are working on that with every practice and every match. The Troup High wrestlers are optimistic and onboard. The Tigers are starting to feel a momentum swing.

“We are becoming a team of we’s, not I’s,” said Lumpkin, who has won eight matches so far this year. “Our coach doesn’t put up with any crap. This program has structure now. Coach Garner is teaching us to be wrestlers and men. We get to throw people around.”

Troup High junior wrestler Thomas Fuller is another Tiger who thinks Garner is going to bring winning back to the program.

“Our coach doesn’t want us quitting. He doesn’t want us getting on our back. We’re supposed to fight hard. We need to outwork the next person,” said the 132-pound Fuller. “You need to have the drive to win.”

Freshman wrestler Christian Hudson is among the Tiger believers, too. He is working his jockstrap off this season.

“We can’t ever give up. I’m trying to be dominant. Wrestling takes hard work and effort,” said Hudson, who is getting competitive in the 170-pound weight class.

Joshua Ogletree is another “can do” wrestling Tiger. Ogletree has a 7-5 record with four pins in the 160-pound division. He credits coach Drew Garner with his success and his upgrade.

“He chewed me out at the first few workouts (this season), but I am learning the mindset,” said Ogletree, the THS junior.

The Tigers are getting some leadership and wins from two other wrestlers, freshman Camden Roberts at 106 pounds and junior Dylan Hayes at 126 pounds.

Garner is also coaching 30 middle school wrestlers from Long Cane. They are all talented and all willing. Some of the eighth-graders will probably earn starting positions in the Troup High lineup next year.

As many as 15 of those Long Cane wrestlers could contend for starting jobs on the Troup High varsity next season. The future is bright for Tiger wrestling.

Drew Garner knows it, and the present Tigers and future Tigers sense the same thing. The Troup High wrestling renaissance is coming.

Coach Drew Garner is a role model and an inspiration in the Troup High wrestling room. Garner is in his first season as the THS head coach.