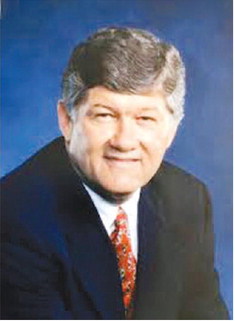 On March 15, 2020, Judge Asbury Quillian Baldwin Jr. passed away at the age of 77. Judge Baldwin was a distinguished judge and former state legislator. He accomplished many things in his life.

He accredits his parents, Asbury Q. Baldwin and Elizabeth Thrasher Baldwin, with setting his life on the path it took by teaching him the values of faith, honesty, hard work and fair treatment to all.

During his time at North Georgia College, he met the love of his life, who he referred to lovingly as “Wonder Woman,” Judy Parker Baldwin. Their relationship took off after she beat him in an election for class president. They were married on July 31st of 1964 after they graduated. He was then a lieutenant in the U.S. Army Airborne Infantry and served active duty from 1964-1966 and was in the Army Reserves for several years after his active duty ended.

He earned the J.D. degree in 1969 from Walter F. George School of Law at Mercer University. He then moved to LaGrange and joined the firm of Richter & Birdsong to start his general practice. In 1974-1985 he was a partner at the firm of Mattox & Baldwin which then led into him being a partner/owner from 1986-1995.

He was named Juvenile Court Judge of Troup County in 1980 and remained as such until 1984.

His lifelong interest in politics led to his election to the Georgia State Senate in November of 1984. He served four terms. He had many legislative accomplishments throughout his time as a judge. He was assistant floor leader for Gov. Joe Frank Harris from 1989 to 1990. He chaired the Senate Judiciary Committee and was vice chairman of the Rules of Committee from 1991-1992.

Judge Baldwin served on the Governor’s Commission on Child Support and held leadership roles on the Council of Superior Court Judges of Georgia during his time on the bench.

He expressed that his most rewarding position of his career was in 2015 when he became Judge of Troup County Mental Health Court.

He also held many civic duties during his life. He served on the boards of United Way, the LaGrange-Troup Chamber of Commerce, New Ventures, LaGrange College and numerous fundraising charities, among others.

In 1975 he was asked to join the Gridiron Secret Society at the University of Georgia and in 1986 he was named to Leadership Georgia.

He served as president of the Jaycees, Kiwanis Club, Troup County Bar Association and the Board of Governors of Highland Country Club.

Amongst all of these he also held a commitment to Boy Scouting. Over the decades he advised Explorer Post 21, chaired the Yellow Jacket District and served on the Chattahoochee Council executive board. He encouraged and helped many Scouts on their journey to earn merit badges and was instrumental in mentoring them. He earned the Silver Beaver award in 1999.

On top of everything else he did, he was also a devout church member. He attended and was an active part of First Methodist Baptist Church from his early days in LaGrange until his last days. He chaired the Administrative Board twice, taught Sunday School, did Saturday night worship, was a Trustee, led the Methodist Ministries Center committee, and was a beloved member of the Builders Class. You could find him every chance he got singing from his favorite pew with joy.

He was a great man that accomplished many good deeds in his life, both civic and legislative. He will be missed. He is survived by his wife, Judy Parker Baldwin, and three children, Asbury Quillian “Trey” Baldwin III and wife Lisa, Leila Baldwin “Lei” Lydle, and Wade Thrasher Baldwin, five grandchildren Samantha Robinson, Elizabeth Lydle, Allie Baldwin, Cora Baldwin and Sean Lydle, a sister, Anne Baldwin and brother, Barton W. Baldwin and wife Brenda.

A memorial service and celebration of life will be held after the current health crisis subsides so that those who wish to remember this great man may do so.