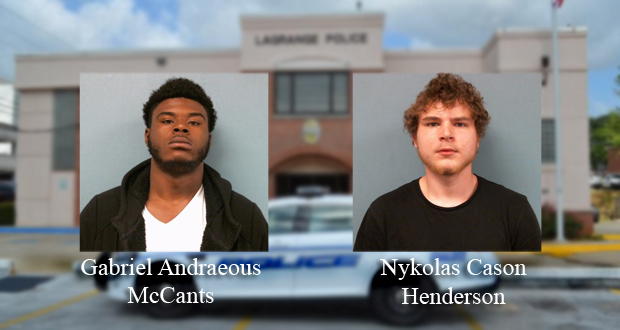 LaGrange Police are looking to identify the owners of suspected stolen property that was recovered during an Entering Auto investigation at a local apartment complex.

The investigation began early Wednesday morning, around 2:09 a.m., when officers were called to the SunRidge apartment complex on Hogansville Road in reference to suspicious persons. The suspects were found to be in possession of several items that police believe were stolen, but they were not able to identify the owners of the property.

Nykolas Cason Henderson and Gabriel Andraeous McCants were arrested and charged with Loitering/Prowling and Criminal Trespass as result of the incident.

Police say they were called to the location after a resident spotted the suspects opening a car door from his balcony. He stated he yelled at them, so they ran off.

Troup County Sheriff’s Deputies observed a Toyota Corolla exiting the location at a high rate of speed shortly after the call, so they conducted an investigative traffic stop on the vehicle where they made contact with Henderson and McCants.

Both subjects were later identified by the witness as the suspects seen trying to illegally enter a vehicle. The witness advised police that he knew the suspects weren’t supposed to be in the vehicle because it belonged to his neighbor. He they did not have time to go inside this vehicle and take anything because he yelled as soon as they opened the door.

Police checked the area and located a multiple vehicles with the center consoles open and the doors unlocked, but they were unable to make contact with the owners to verify if the vehicles had been entered or not.

In the meantime, Sheriff’s Deputies were able to locate a Smith and Wesson handgun, six cell phones, a purse, two wallets, and a backpack, believed to have been stolen during the incident.

Henderson later told police that they had gone to the apartment complex to visit a friend, but he was not home, so the left. McCants stated that he was just riding with Henderson and he did not even get out of the car, despite his shoes having wet grass on them.

Henderson claimed that the firearm belonged to a friend, who allowed him to borrow it, but he could not or would not tell police who the owner was.

Due to suspicions that the suspects were entering vehicles and the fact that the items found are routinely taken from vehicles, the suspected stolen property was seized until the rightful owners can be confirmed.

As a result, McCants, age 23, and Henderson, age 19, were arrested and transported to the Troup County Jail where they were charged with Loitering/ Prowling and Criminal Trespass.

This case is still under investigation by the La-Grange Police Department Criminal Investigation Section.

If you determine you are a victim of theft, or your vehicle was entered, please contact the La-Grange Police Department at706-883-2603. Anonymous tips can also be submitted to the Troup County Crime Stoppers at 706-812-1000.