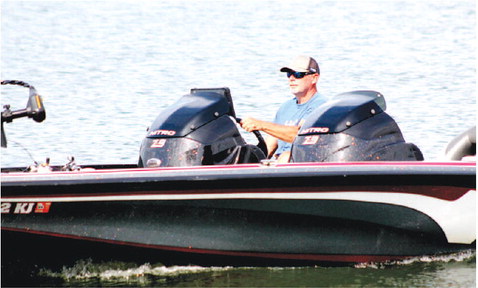 A day on the lake requires water, fish, and common sense.

On Thursday afternoon, Aubrey Craft of Decatur had all of that. He insisted, and he caught a good time on West Point Lake.

It was inevitable, like tartar sauce on a plate full of largemouth bass. Hold the butter.

Craft did that in an outdoorsman kind of way.

“I get a peace of mind on this lake. I get away from everything (the coronavirus included). I enjoy myself, and I like the breeze,” said Craft.

He also highlighted the fishing with an emphasis on catching. Craft made more than a decent haul with 10 catches, including a 2.5-pound bluegill, a four-pound catfish, and a five-pound largemouth bass.

Craft tried different techniques and a variety of depths, from 6 to 15 feet. He used live worms on all of his West Point Lake catches.

“I found the shady part (of the lake) where they bite. I’ve been fishing a long time. I’ve been coming to West Point Lake for 15 years,” said Craft.

He has also been catching fish by the bucket full for years, Thursday included.

“I think I know every spot on this lake. I’m patient. I fish with three poles. One fish moved my pole (out of the holder),” said Craft.

The fish were looking for a handout, for sure. Ashley Drake of Columbus and Johnny Chapman of Woodland, Ga. caughtand- released seven more Thursday afternoon fish, all spotted bass.

Drake and Chapman were drifting, hooking, and going where the West Point Lake wind took them. The world was floating by.

“We got lucky. It was raining, and it was hot. We were fishing at 10 feet with plastic worms,” said Drake.

He and Chapman still boated their share of twopound bass. There was a man-versus-fish fiasco going on.

“The spotted bass were aggressive. They were fighting. Spotted bass are mean,” said Chapman.

As for the water temperature, it was just perfect, at 74 degrees, for the spotted bass and the fishermen. And Bud Darr of Marietta was one of the participating anglers.

Darr caught 18 largemouth and spotted bass. Darr’s fish, which were all released, were as hefty as 4.3 pounds (a largemouth).

On this most opportune day on the lake, Darr was going to war with a black and blue Picasso Jig. Darr also tried a Shakyhead lure, which inticed some more bass to bite the hook.

“It was good fishing. I was focusing on the deep brush. My adrenaline was pumping,” said Darr.

He used some leverage, and he used his lures. West Point Lake was alive and cooking.

“There are some good fish in here, but you have to look for them. We were getting a good, little breeze, too,” said Darr.