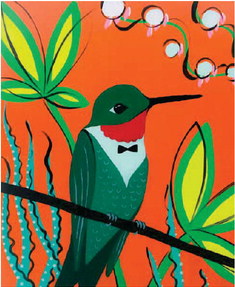 The 23rd annual Hogansville Hummingbird Festival has been canceled due to the safety concerns amid the coronavirus pandemic.

The Festival, slated to be held in downtown Hogansville this October, has been rescheduled for next year, said Jason Stewart, Festival Chairman. The decision to cancel the festival was made early so that vendors and visitors traveling long distances can avoid canceling their plans later on, said Stewart.

“We don’t know what guidelines or restrictions the state will be under regarding the virus by October,” said Hogansville Mayor Bill Stankiewicz. “The safety of our vendors, volunteers, and visitors is our primary concern.”

The Festival, which draws 15,000 or more people to Hogansville on the third weekend in October, brings together arts and crafts vendors and musicians amid a large international food court. It has been one of West Central Georgia’s favorite fall festivals for years.

“We normally have other events and activities in October as part of the Festival,” said Stewart. “We will probably go forward with the 5K run.” Vendors who have put down a deposit for booth space will be able to maintain their spot for the Festival in 2021, he said.

The annual Festival art contest was held in early spring when there was still hope of having a festival this year, and LaGrange artist Andy Porter’s hummingbird painting was selected as the winner. Normally the winning art is used in Festival posters and t-shirts. “We’re considering going forward with the t-shirts this year,” said Stewart. And, because this year is the 150-year anniversary of the incorporation of the city of Hogansville, the shirts could incorporate that event as well.