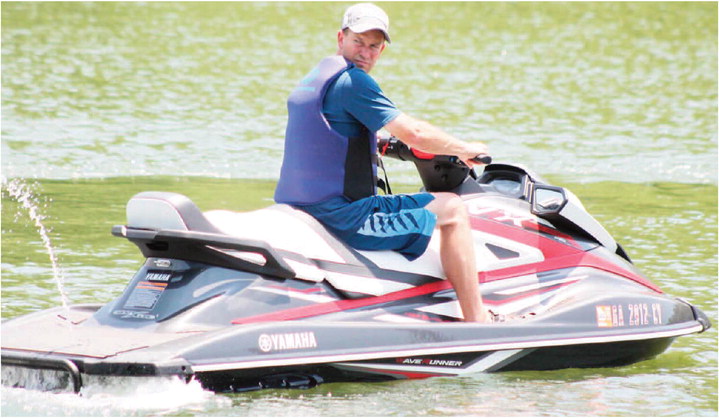 Live crickets did the trick and caught the fish. No mustard was necessary.

The father-and-son fishing duo of David and Jacob Bearden were rather important, however. The Beardens did the reeling and the catching as they plucked 35 to 40 bream out of the calm water at West Point Lake.

It was a Sunday to remember.

“We sat under the bridge, and we caught some fish on the shady bank. It was nothing to brag about, but we caught bream in some deep pockets. We were getting back to nature,” said Jacob Bearden, a junior at Troup High School.

He and his dad caught some one-pound bream in three feet of water. And they made every one of their catches with live bait.

Chris Dunn of Austell went the brim fishing route as well. Dunn made one catch from shore. He was fishing in 10 feet of water with a live worm.

Dunn was doing it, all afternoon in between the puffy clouds and the blistering sun. He found a little bit of shade and a bite here and there.

“I am out here chilling and relaxing. I’m trying to enjoy myself. This is a good place to fish,” Dunn said of West Point Lake. “I caught a bunch of crappie here before.”

The dynamic duo of David and Debbie Mc-Carty got a bang out of the 4th of July weekend, too. The husband-and-wife fishing team caught 10 to 12 spotted bass and bream on Sunday.

“This is good fishing. We love the outdoors. We were fishing with jigs and crankbait. We know where the fish are going to bite,” said David McCarty, the angler from Thomaston.

He and his wife were fishing from one to 12 feet deep. They even had a 10pound gar swim near their boat.

“We were getting our peace and quiet. We were fishing deep enough,” said Debbie McCarty.

She caught the first fish of the day as she boated a spotted bass at 9:30 in the morning. The fish were headed toward their boat all day. All of their catches weighed between 1 and 1.5 pounds.

“We were even trolling a little bit. We come here every weekend,” David McCarty said of West Point Lake.

As for the female portion of the fishing team, she has some deep-seeded knowhow. Debbie Mc-Carty is a ferocious angler.

“The bigger fish are deeper where it’s cooler,” McCarty said.