City of LaGrange Employee Honored for 25 Years of Service 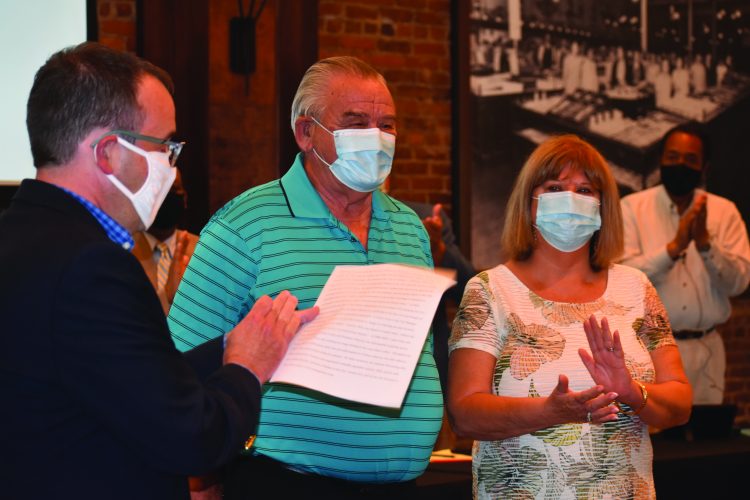 The City of LaGrange is honoring Collections Superintendent Billy East for his dedicated 25 years of service.

Billy began his career with the City of LaGrange as a Patrolman in the LaGrange Police Department October 28, 1966 where he worked until 1968 when he resigned to be a deputy with the Troup County Sheriff’s Department. He returned to the City on October 7, 1996 as a Collections Agent and was quickly promoted to Collections Manger as the City made the decision to bring its collections effort inhouse. He and his staff quickly validated this decision by aggressively pursuing  delinquent accounts, looking for win-win solutions, and becoming experts in the field.

The late John Bell, who served in the position of City Clerk/Treasurer, noted on one of Billy’s early performance reviews that “LaGrange’s reputation is well-known in the bankruptcy court in Newnan and lawyers are taking notice.” As Billy continued to show his value to the Finance Department, he was tasked with managing the City’s loan and rent programs where his staff collected over $200,000 in the first year and brought all accounts current or placed on a payment arrangement.

A citizen wrote to the City Manager around this time, “I suppose it is rare that someone in charge of collecting past due accounts receives an accolade from a debtor. Actually, Billy may deserve a Purple Heart.”

“Without fail, Billy always represents the City in a professional manner,” said Utilities Director Patrick Bowie. “Throughout his many years in collections, Billy has also provided support to Utilities where he was often asked to assist with a particularly difficult customer. On many occasions the customer left smiling after Billy defused the situation and negotiated a mutually agreeable solution. We are lucky to have Billy at the City of LaGrange.”

In 2000, Billy’s supervisory role was expanded to include Courts and Probation where he was instrumental in gearing up the city’s new probation office and catching up a huge backlog in the court clerk’s office. Billy and his staff have added literally millions of dollars to the City’s bottom line and we are very fortunate to have him as part of our management team. “I really enjoy working with the city staff and the community,” said East. “I’m so proud to work with such a great group. They’ve been really good to me and I will continue to try and pass along everything I’ve have to our community.”