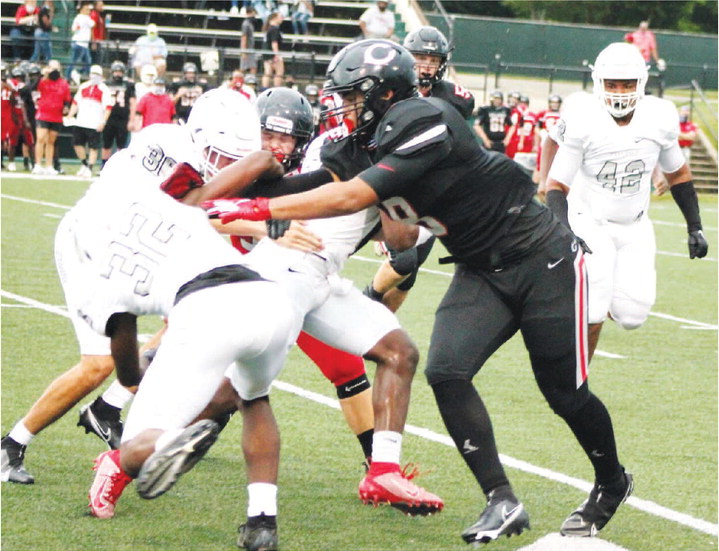 Everything fell into place.

It was just that kind of preseason football scrimmage for Callaway High in the Black & White game on Friday night. On a rain-slick evening at the ball park, between 500 and 1,000 fans watched the proceedings at Callaway Stadium.

For the Cavaliers and head coach Pete Wiggins in particular, it was what they all came for. There were hard hits and splitsecond decisions.

There were bloody noses.

There was row-afterrow of umbrellas in the bleachers with some rainsoaked heads. But out on the field there were punishing runs, crisp passes and some sledgehammer Cavalier defense.

Demetrius Coleman’s spirals cut through the raindrops. Coleman is the Callaway High senior quarterback. Coleman’s passes were on time and on target. The sideline patterns and the mid-range tosses were dropped into the arms of the Cavalier receivers.

Callaway High played some high-velocity football on offense and defense. The Cavaliers showcased some depth and intangibles. They have the kind of speed that wins football games on Friday nights.

And, by the way, coach Pete Wiggins was beaming and boasting. He likes this Callaway High football team, even though this is still the preseason.

Wiggins still saw some good signs. His team played like Callaway High School is supposed to.

“We played with physicality. We played a lot of guys (100). Our defense looked good, and we ran to the ball,” said Wiggins.

The star of the two-hour, five-quarter scrimmage was an offensive guy, however. Cavalier senior tailback Charlie Dixon scampered for 83 yards on 10 carries. He scored on touchdown runs of 25 and 10 yards.

Dixon ran like the evening express. He refused to be tackled. He used speed, power and stiffarms.

There were some other scrimmage highlights for Callaway High as well, like a Blake Eubanks 41yard field goal and a Demetrius Coleman 17yard first quarter pass completion.

The Black & White intrasquad scrimmage also included some blitzing defense from the likes of Jalin Shephard, Trey Stephens and junior cornerback Jarvis Parks. Stephens and Parks had second half sacks.

Callaway High will get the 2020 regular season started on Sept. 11 against the Troup Tigers. The rivalry football game will kick off at 8 p.m. at Callaway Stadium.