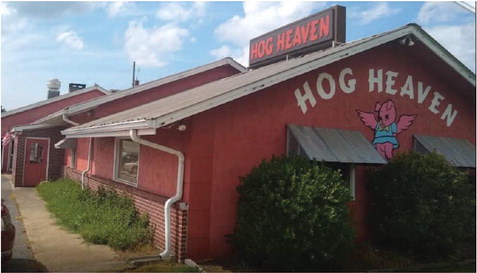 Troup County Sheriff’s Investigators are looking to identify any potential suspects involved in a shooting outside a local barbeque restaurant over the weekend.

Saturday night, about 10:55 p.m., Troup County Sheriff’s Deputies were called to the 2200 block of West Point Road in La-Grange in reference to reports of multiple gunshots fired at a vehicle.

When deputies arrived they found an abandoned white Range Rover with several bullet holes partially blocking West Point Road. Witnesses in the area reported hearing 20 or more gunshots. The Range Rover was seen traveling through a parking lot of Hog Heaven on West Point Road, striking a vehicle before coming to rest in the roadway. Sheriff’s Investigators were later able to locate the four male occupants of the vehicle at a business on Sage Commercial Drive. The men told investigators that the vehicle was shot at multiple times while pulling into the Hog Heaven parking lot. No one in the vehicle was struck or injured from the gunshots.

So far, investigators have been unable to identify any potential suspects for the incident, even after talking to the victims, whom deputies indicate were not fully cooperative. This incident is still under investigation by the Troup County Sheriff’s Office Criminal Investigation Division.

If anyone has any further information about this incident, please contact the Troup County Sheriff’s Office at 706-883-1616. Anonymous tip can also be left with the Troup County Crime Stoppers at 706-812-1000.