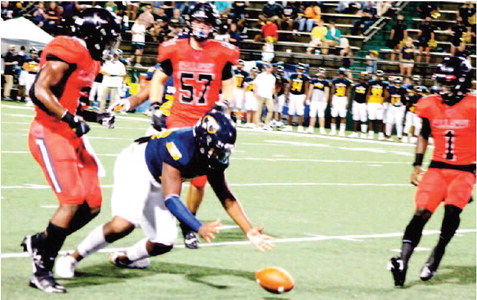 In every way it was worth the price of admission.

There was trash talking. There were stares that could have burned a hole through a steel wall. There were also late hits and some backbreaking defense. There were more hits than in a Nashville country music recording studio.

The diehard football fans at Callaway Stadium weren’t complaining on Friday night. The spectators were applauding every twist and turn of the game. And there were a few.

Nobody scored until the second quarter. After that, Callaway High got its foot in the door. The teams exchanged defensive blows and tore up some turf. The intensity was rising, and some tempers were flaring.

In some ways it was a typical rivalry game. Both teams dug in. The players pitched a fit, and the Cavaliers won the game with a 27-7 decision over a deflated Troup High football team.

And according to Cavalier senior defensive end Keshawn Suggs, “We were relentless. We kept going. We wanted it more than them.”

Suggs and the Callaway High defense held fleetfooted Tiger running back Anthony Ferguson to a rather pedestrian total of 71 yards on 22 carries. Ferguson never found paydirt.

He never scored – not in this county rivalry. Troup High had a problem all night moving the Cavalier defense. Callaway High would not budge. The Cavaliers gang-tackled until they were green in the gills.

And they refused to let the Tigers march the ball down the field. Troup High had no 10 or 15-play drives. The Tigers longest run from scrimmage all evening was a 69-yard scamper from Troup High freshman quarterback Taeo Todd in the fourth quarter.

Troup High, a team that is sputtering, was held to six first downs and 175 yards. The lone touchdown of the night for the Tigers came on a Todd five-yard scoring toss with 5:47 left in the third quarter.

Other than that, there was a lid on the end zone for Troup High. That did surprise Tigers head football coach Tanner Glisson. He was underwhelmed.

“We had so many unforced errors. This (game) was tough. We put a lot into this (rivalry matchup). We are not that good. We lacked some explosiveness,” said Glisson, the coach of the 0-2 Tigers.

Troup High’s defense did rock a few facemasks along the way, however. The Tiger defense played at a fever pitch at different junctures of the game. Troup High held the Cavaliers scoreless in the first period.

The Tigers did give up two touchdowns in the second quarter. Senior tailback Charlie Dixon finally got the Cavaliers going with a 15-yard touchdown run with 9:06 remaining in the first half.

Callaway High would add another touchdown in the second period. The Cavaliers were awarded a touchdown after a Troup High pass interference call in the Tiger end zone.

The Cavaliers took a 14-0 lead. Troup High managed to cut that deficit in half in the third period as Taeo Todd unloaded his five-yard touchdown pass. But only 18 seconds later, Callaway High answered with a 90-yard kickoff return for a touchdown from senior Osiris Rivas.

He and the Cavaliers opened up a 21-7 lead at the 5:29 juncture of the third quarter. Callaway High had the game in the palm of its hand.

“That was the best feeling in the world. We had some heart,” said Rivas.

Callaway High would ring up another touchdown as well on a Dixon 31-yard run in the fourth quarter. Dixon finished the game with 19 carries for 96 yards and two touchdowns.

He had most of the Cavalier offense. Callaway High was otherwise limited to eight first downs and 167 yards (127 rushing, 40 passing) on the evening. The Cavaliers only had occasional success moving the ball against the tenacious Troup High defense.

“We ran to the ball, and we have a good defense,” said coach Tanner Glisson of the Tigers. “We just need to stop killing ourself (with offensive and special teams mistakes).”