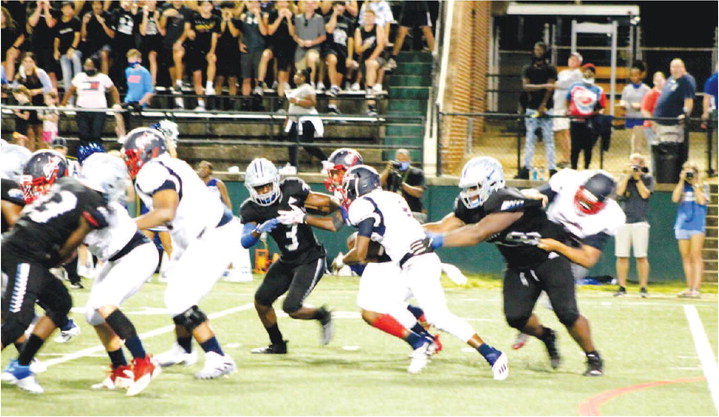 As the ground shook and the earth tilted on its axis, the Grangers pounded their chests and won a game.

It took awhile – five quarters of football, precisely – but LaGrange High showed some composure and some mental toughness. The Grangers completed the task at hand with a 35-28 overtime win over Columbus Northside on Thursday night at Callaway Stadium. “We’re starting a new beginning. We worked hard, and we wanted this,” said Granger senior running back Kale Gibbs.

He did his part and then some. Gibbs was cutting and grinding. He was eluding and going for the goal line. Gibbs changed speeds like a pitcher.

He stopped and started. And his fastball was hard to catch, but so was he. Gibbs motored for 171 yards on 20 carries. He scored a pair of touchdowns, too. “I was a little nervous, and I’m tired now. I had some strong linemen (blocking for me),” said Gibbs, the 5-foot-9, 175pound speedster.

He scored on a two-yard touchdown run in the second quarter to give the Grangers a 14-0 lead. Gibbs also streaked into the end zone on a 57-yard dash for another touchdown at the 10:15 mark of the third period.

LaGrange High took a 21-7 lead. The Grangers had a lead of some sort most of the evening. La-Grange High senior fullback Caleb Ross busted through for a five-yard score in the first quarter.

Ross gave the Grangers a 7-0 advantage. Northside did rally in the second half. The Patriots came barreling back, erasing a three-touchdown deficit and tying the game at 28-28 late in the fourth period.

“We stuck together and played hard. We showed some heart and character,” said coach Andrew Oropeza of Northside (1-1).

The Patriots cut the La-Grange High lead to 28-14 with 1:09 left in the third quarter as sophomore halfback Malachi Hosley scored on a three-yard burst. Northside scored again on an 11-yard touchdown pass from junior quarterback Ryan Van Dinter in the fourth quarter.

And with just over a minute left in the game, another Patriot quarterback made a play or two. Eliu McMoore slipped a 17-yard touchdown pass to Patriot teammate Vhon Zeta.

McMoore then passed for the two-point conversion to deadlock the game at 28-28. And after the Grangers missed a lastgasp field goal try from 45 yards with 26 seconds left in the fourth period, the game was very much up for grabs.

But that is when the Grangers went back to work. LaGrange High got on with it in overtime. The Grangers found a way to win. These are the “new look” Grangers aren’t they?

Of course they are.

It was winning time for LaGrange High in the fifth quarter of the night. The Grangers went back in front on a Jaylan Brown 15-yard touchdown pass to senior wide receiver Adrian Traylor.

LaGrange High claimed a 35-28 lead in overtime. But there was still more drama to come. The game was not over quite yet. The finishing touches did occur for the Grangers with a sack by LaGrange High senior defensive end Lataurus Swindle and then an interception from Granger cornerback Jakobe Jones at the Patriot 10 yard line.

At that point, LaGrange High was ready to celebrate. And so was new Granger head coach Matt Napier, who recorded his first win at LHS.

“This was not about me. This was about the kids. We showed some resilience, and we kept fighting. I am proud of this effort,” said Napier.

He was also happy with sophomore quarterback Jaylan Brown’s two touchdown passes and the Grangers final offensive total of 355 yards and 14 first downs.

It was a Granger kind of evening at Callaway Stadium.

“I have some real good players,” Napier said of his 1-1 football team.