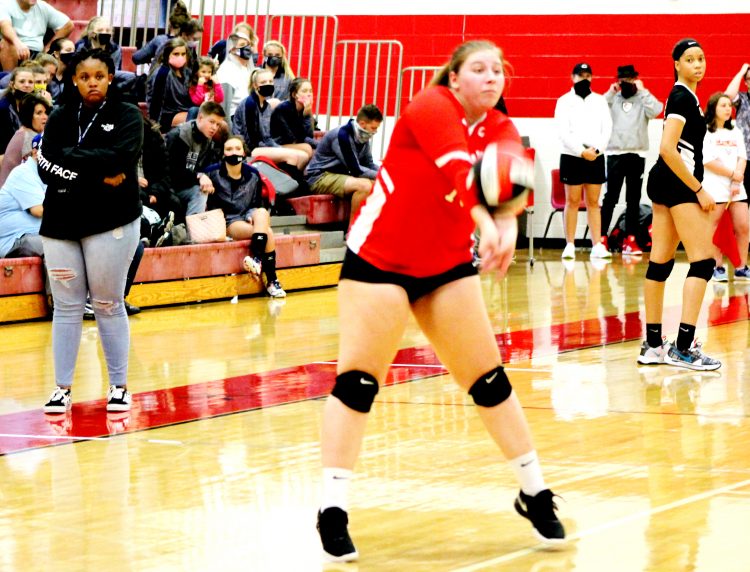 Of course they were desperate. It was Senior Night on the volleyball court for the Lady Cavaliers.

They were willing to do anything to win within the boundary of good sportsmanship. So naturally, Callaway High went out and left everything on the floor, including sweat and total aggression.

The Lady Cavaliers were fighting mad. They played volleyball like their life depended on it.

And it did, in a way. No doubt, Callaway High raised its play a notch or two. The Lady Cavaliers traveled the road from solid to sensational. Callaway High rallied for a 2-1 victory over the Model High School Lady Blue Devils on Thursday night in Hogansville.

It was an evening of high spikes and low saves. The Lady Cavaliers did it all, including winning in front of a gym full of volleyball patrons – mothers, fathers and volleyball fanatics.

“This was a region game, and we communicated better. We were digging and hitting. We played amazing, and we were loving it,” said Lady Cavalier senior middle blocker Tiffany Bledsoe.

She was in the middle of the Senior Night mayhem. Bledsoe added her 50 cents worth with a volleyball kill, which sliced the Model lead to 9-4 in the first set.

Model was feeling it early on. But the Lady Cavaliers woke up and rallied to tie the first set at 12-12 and then 14-14. Callaway High also scored the next three points, with a Shaunna Tumlin service ace included.

“We knew it was Senior Night, and we came prepared. We hustled more, and our team is getting closer on the court,” said Callaway High freshman outside hitter Haley Blair.

The Lady Cavaliers had their chances to win the second set, too. The game was tied at 2-2, 4-4 and 7-7. Blair had an early service ace for Callaway High.

The Lady Blue Devils also got some service aces from senior setter Caitlin Twilley and senior outside hitter Laura Kate Cole. Model had a 6-5 lead, which later evaporated.

Callaway High stormed back behind Haley Blair. She delivered four straight service aces as CHS rallied for a 10-7 lead in the second set.

And Neely Brownlow of Model served up an important service ace late in the second set.

“We showed some heart, and we had some good serves,” said coach Chuck Bryant of the Lady Blue Devils (12-17).

Model felt good going to the third set. The match was there for the taking, and Callaway High took it. The Lady Cavaliers were just a little quicker to the ball than the Lady Blue Devils.

And the Lady Cavaliers came up with one final point to win the match. They were not about to lose on Senior Night at Callaway High School. The third set went to CHS, 15-11.

“We are hanging in there. We’re getting consistent, and we know where to put the ball. We are working hard,” said Lady Cavalier head volleyball coach Leigh Bailey.

Model did not have the finishing power of Callaway High. “We got into a funk, and we were not making the passes. We got into a hole,” said Caitlin Twilley, the 5-foot-3 senior setter for the Lady Blue Devils.