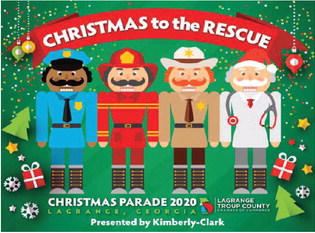 The theme for this year’s parade, “Christmas to the Rescue,” was inspired by our communities’ first responders and their amazing efforts this past year in slowing the spread of Coronavirus and keeping our community safe.

As part of the registration process, all participants will be asked to contribute a toy. “We partner with Toys for Tots every year to distribute the toys to spread Christmas cheer to children throughout Troup County,” noted Leslie Traylor, Director of Member Engagement for the Chamber. “The Chamber reminds everyone that the best gift is one that is given to someone in need.”

The Chamber also reminds spectators that the parade will begin at Granger Park and head south on North Greenwood Street. Marching groups will be merged into the parade from St. Mark’s with the procession going down North Greenwood to Haralson Street. The parade will then turn right onto Church Street to the Square and Bull Street. The parade will turn left onto Broome Street before turning back onto Main. The procession will then follow Main Street, past the Square to Ridley Avenue. *Parade route is subject to change and the Chamber will make a further announcement.* Traylor stated “there are so many great places to view the parade throughout downtown.” We ask that parade viewers spread out all along the parade route to allow room for social distancing.

“We are two months away, but we predict perfect parade weather,” commented Traylor. “Bring a jacket though. I hear Santa is bringing cool temps from the North Pole with him.” The parade will proceed rain or shine.