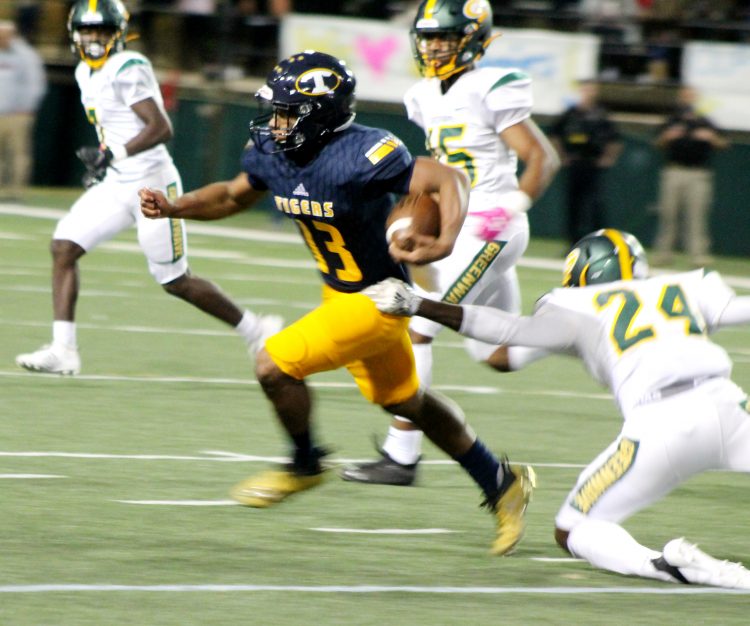 Attitude is everything. Just ask the Troup High Tigers.

They played with a chip on their shoulder, and Troup High shattered its three-game losing streak with a 42-0 shutout against Columbus Spencer on Friday night. Winning never felt so good for the Tiger football team.

“We got the monkey off our back. We fought for every yard. We ran hard, and our defense flew around. We played physical, and we controlled the line (of scrimmage),” said Troup High head coach Tanner Glisson.

The Tigers opened up holes big enough for an 18-wheeler to drive through. Troup High’s offensive line played some dominating football with senior center Will Cooley and senior offensive tackle Royce White. The Tigers kept moving the line of scrimmage, thanks to Cooley and White.

They created space in the Region 2-AAAA football game at Callaway Stadium. The running game made a swift return to the game plan and the field for Troup High. The Tigers rushed for 354 yards against Spencer.

Troup High was running between the tackles. The Tigers also rounded the corner with speed and persistence.

And Troup High freshman quarterback Taeo Todd led the offensive assault with 11 carries for 192 yards and two touchdowns. Todd scored twice in the third period on touchdown runs from nine and 65 yards.

“We worked, and the line blocked,” said Todd. “We got the momentum.”

The Tigers also got the ball in the hands of senior tailback Anthony Ferguson. He was productive and pretty doggone fast with six carries for 44 yards. Ferguson had two touchdown runs on the night from 14 and five yards.

Troup High also found some high steppers with senior running back Navontae Moss and sophomore ball carrier A.J. Tucker. There was just one ball, but a lot of unselfish play from the bevy of running backs for the Tigers.

Moss got nine touches and ran for 80 yards. He scored on a two-yard plunge in the second quarter. The Tigers also got a two-yard touchdown run from Tucker in the first half. Tucker waited his turn, and he was rewarded.

Tucker rushed for 31 yards on five carries in the game. Troup High was moving and shaking with 21 first downs and a total of 433 yards. The Spencer Green Wave went about its business, too, in sporadic fashion with just eight first downs and 160 yards.

“We are young. Over 60 percent of our players are underclassmen. We need experience,” said Spencer head coach Robert Sanders, the former Fort Valley State defensive back (1987-91).

But Hoskins, nor any of the other Green Wave players scored in the region game in LaGrange. The Troup High defense clamped down on Spencer with senior linebacker Zy Varner, senior cornerback Jace Godwin and sophomore Navelle Dean.

Columbus Spencer was escorted out of the stadium at the end of the night. The Green Wave left with an 0-5 record (and 0-3 in the region). Troup High is 1-3 on the year. The Tigers are also 1-1 in Region 2-AAAA.

“Troup has a good program, and you can tell they’ve been to the playoffs (the last four years),” said Green Wave coach Robert Sanders.