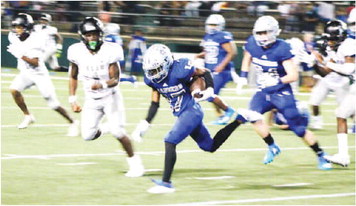 LaGrange High went overboard for homecoming – life jacket and all.

There were the usual long gowns, red lipstick and pretty girls at the Granger homecoming football game on Thursday night at Callaway Stadium. Names were called.

Hopes were up, and the applause was forthcoming. The football fans were sitting on the edge of their seats, along with the mothers, the fathers and the La-Grange High students.

Homecoming is always a game-changer for La-Grange High. And it was again this time, too. Some lives were changed. Some flowers were presented to the homecoming court.

And one special girl was rewarded. And that was Carmen Lynch. The senior from LHS was announced as the Granger homecoming queen. Lynch is 17 years old, and she was in a homecoming daze.

Lynch had her night of nights. And she was joined by Adrian Traylor, also a LaGrange High senior. Traylor, a Granger football player, was selected as the LHS homecoming king.

Traylor is also a La-Grange High football standout – the kind that plays both defensive back and wide receiver for the Grangers.

And no LHS homecoming would be complete without a game, a win and some blood-curdling encouragement from the bleachers. There were 2,000 fans in the house, and the Grangers did win the football game over Columbus Shaw.

The hometown Grangers got what they wanted and more, including a 47-7 victory over the Shaw Raiders. There was suspense, and there were seven LHS touchdowns for the homecoming crowd.

LaGrange High put on a show with homecoming crowns and 364 yards of offense. The Grangers made 18 first downs and lots of homecoming memories. And LaGrange High won a Region 2-AAAA football game with some muscle and some flair.

“Our players have bought in. We executed. We played hard, and we had great effort,” said Matt Napier, the head coach of the red hot Grangers.

They have won four games in a row – over the Northside Patriots, Columbus High, Kendrick and now the Shaw Raiders. LaGrange High has outscored those four teams by a combined, 168-81.

There is not one player carrying the load for the Grangers either. The entire football roster is making a difference for the La-Grange High football team.

Gibbs also scored on a pair of nine-yard touchdown runs. “It felt great. We play for each other. We had each others backs,” said Gibbs, who rushed for 148 yards on 18 carries.

The Grangers also got some expert quarterback play in the first half. La-Grange High sophomore signal caller Jaylan Brown squirted through as well on an eight-yard scoring run in the second quarter.

Brown loosened up his arm as well. Brown hit La-Grange High sophomore wide receiver Magic Johnson with a 22-yard touchdown pass with 24 seconds left in the first half.

“We stuck together. We played with effort, and we were more physical (than Shaw),” said Brown, who had 194 all purpose yards on the night (with 151 yards passing and 43 yards rushing).

The Grangers played some “slobberknocker” defense all night, too. La-Grange High got two first half interceptions from junior cornerback Jakobe Jones.

The LaGrange High defense also recovered a fumble in the end zone in the third period of play. The Grangers are definitely trending up with an overall record of 4-1 and a mark of 3-0 in the region.

Meanwhile, Columbus Shaw fell to 0-4 on the season and 0-2 in the region.

“LaGrange was much faster, and we made some mistakes,” said Shaw senior running back Derrick Kelley.