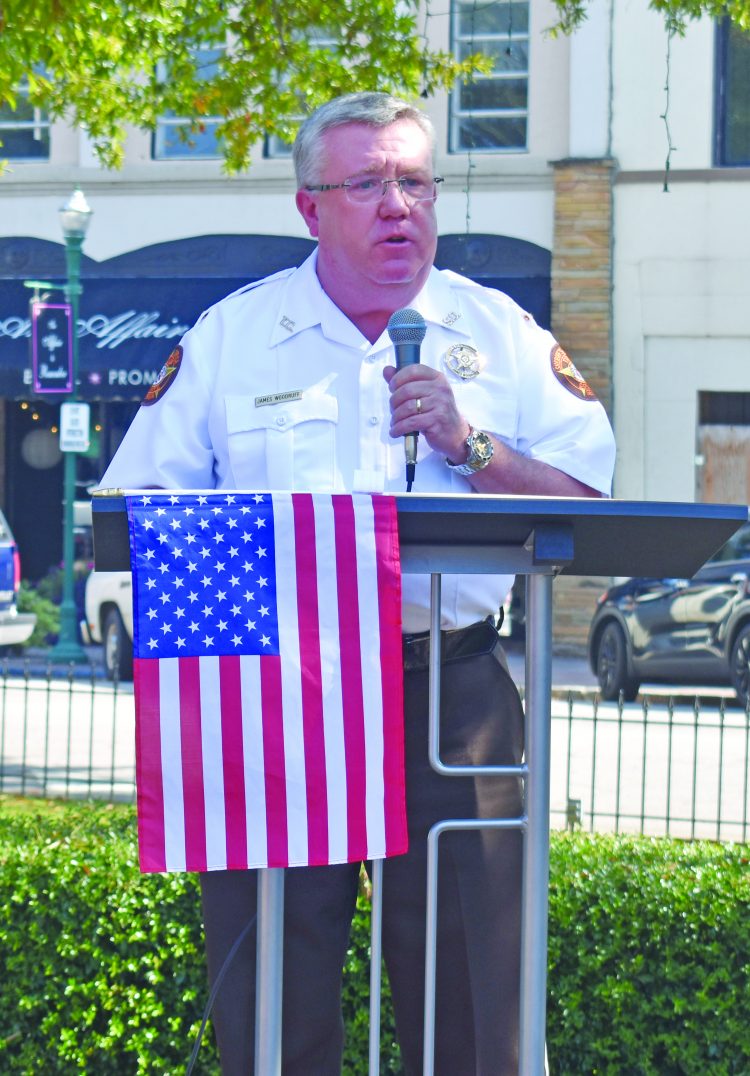 Thursday morning, Troup County Republicans held a rally on Lafayette Square in LaGrange to drum up support for conservative candidates in the upcoming election on Nov. 3.

Troup County’s own U.S. Representative Drew Ferguson was first to speak encouraging attendees to make sure they vote, adding that he was proud to have recently cast his vote for President Donald Trump. Although most candidates voiced their support for the president, the event primarily served to promote state and local candidates and encourage voting.

“When Americans get up in the morning, they think of some very basic things. They think about a job that means something to them. They think about coming home to a decent, safe place to live. They want their kids educated well. And at the end of the day, they want the freedom to be left alone to live their lives to be who they want to be in this great nation. If you look at where democrats are, they state in direct opposition to that,” said Ferguson.

Encouraging everyone one to vote was a common thread among the candidates, who also encouraged those who have already voted to bring friends and family to the polls.

“This is the year to push, pull, or drag your friends to the polls. We cannot sit at home. I can assure you the other side is not sitting at home,” said Republican State Representative Randy Nix.

“We’ve got to get out there and vote for the President, but don’t stop there,” said Nix, calling for votes accross the ticket. “It’s not just the top of ticket; it’s all the way down.”

Republican state house challenger David Jenkins was also on hand and was praised by both Ferguson and Nix. Jenkins is running against Minority Leader Robert Trammell in a district that was once thought unwinnable by republicans.

“This race is bigger than us. We all know that the 132nd district is finally going to get representation in the state house, because my opponent [Trammell] isn’t representing this district,” said Jenkins.

Jenkins advised that he looks forward to working with mentors Nix and State Senator Randy Robertson, and bringing the 132nd back into the majority, where things can finally get done for Troup County.

Robertson also criticized Trammell saying he has opposed several pieces of legislation that he wrote, including measures to help protect first responders and their families.

“I cannot work with him,” said Robertson. “He will not vote for common sense.”

Robertson also took the opportunity to praise Sheriff James Woodruff, who is running for his third term as Troup County Sheriff.

“Know that when you are in your bed at night, he’s doing what needs to be done to keep Troup County safe,” said Robertson.

Sheriff Woodruff was also on hand and he thanked his staff for their support over his eight years as Troup County Sheriff and asked for the continued support of the law enforcement in Troup County.

“The stupidest thing anybody could ever do would be to defund law enforcement,” said Woodruff. “Who would you call when it gets rough at your house?”

Woodruff also encouraged his fellow republicans to remember that they serve the people of Georgia and Troup County, and not the other way around.

“If we, as elected officials, will remember that we are servants to the community, then we’ll do the right job. We mess up when we start thinking that it’s all about us. It’s not. It’s about our service to you,” explained Woodruff.

District 3 Commissioner Lewis Davis noted that he was proud of how everyone on the Troup County Board of Commissioners are able to work together under his tenure and hopes to continue to serve the people of Troup County.

“All five of us, whether democrat or republican, work together for the betterment of Troup County,” noted Davis.

District 4 Commissioner Morris Jones offered similar sentiments, asking voters to allow him to continue progress that has been made in Troup County.

“We want to continue to grow in a smart way and continue to have good businesses for our children, so that when they leave to get an education, they can come back to Troup County,” said Jones.

“District 2 is continually growing. It’s moving in the right direction and I would like to represent it for another four years,” said Cadenhead. “We’ve made a lot of progress for Troup County and we’d like to keep that.

Several more republican events are scheduled for LaGrange in the next two weeks.

On Oct. 22, State House Speaker David Ralston will be appearing at Beacon Brewery at 12 p.m.

Congressman Doug Collins will be bringing his bus tour by Lafayette Square on Oct. 23 around 8 a.m., with special guest Mike Huckabee.

And finally, the Trump Bus is scheduled to appear at the Troup County Republican Headquarters on Church Street on Oct. 27.