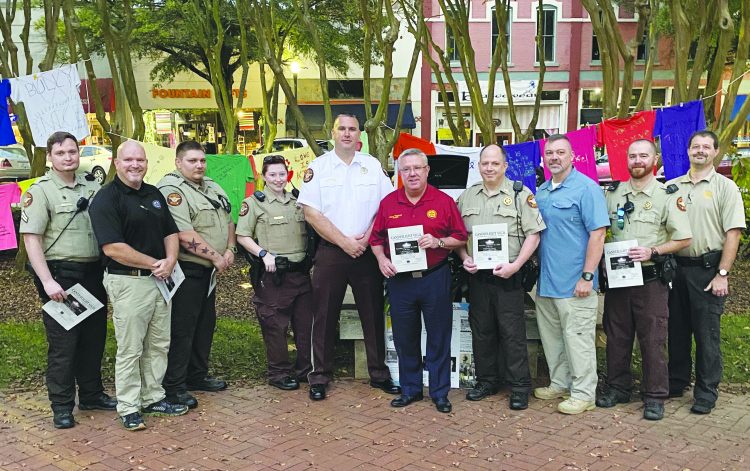 The LaGrange community showed support for domestic abuse victims and survivors on Tuesday in a moving candlelight vigil ceremony in downtown LaGrange. Hosted by Harmony House, the vigil paid tribute to men and women currently suffering from domestic abuse—as well as to the 166 individuals who lost their lives to domestic abuse in Georgia last year.

Law enforcement officers, including the Troup County Sheriff’s Office and the LaGrange Police Department, attended the vigil in a show of solidarity with domestic abuse victims both in Troup County and throughout the state.

Harmony House Executive Director Michele Bedingfield addressed the gathered crowd and encouraged the enforcement of COVID-19 mitigation guidelines as outlined by the CDC.

The most emotional testimony of the evening came from guest speaker Jerome Cofield who detailed the brutal murder of his sister and his brother-in-law by a family acquaintance in 2000.

Cofield then explained that he had plans to meet his sister at 7 o’clock the day of her murder but didn’t arrive until noon after various delays in his schedule. He later learned that the murders took place over a period of five hours starting at 7 a.m. that morning—and that the killer had originally planned to kill him when he arrived later that day.

“I want to go into preacher mode now,” he said after detailing the graphic details of his sister’s murder and of her battle to survive and of his own near-death encounter. “God has a way of stopping and blocking what’s coming your way.”

God’s intervention, he said, enabled him to work with young men and fathers through the Empowerment 3D Inc. Dress for Success program—and his testimony of that day has helped numerous individuals turn to Christ.

“In 2002, the God that I serve knew that this day was going to arrive,” he said. “My sister was reading her daily journal that morning, and when they went in and took photos of the crime scene, there was a journal laying on the floor. It had blood splatter all over it.”

“It is believed that that is the book that my sister was reading when she heard the shot at the house,” he said. “The book fell on the floor, and it fell open to the page she was reading.”

Because of this, Cofield was able to read the last words his sister saw that morning.

Cofield finished on a positive note about the powerful impact the events of that morning had in turning people toward God.

“I thank God for the opportunity,” he said. “Even though my sister lost her life … I have seen many give their lives to Christ. Because of her death, they now live for Christ.”

Candles were provided at the event and were lit as Cofield read off the names of all 166 individuals who lost their lives to domestic violence in Georgia last year.

Bedingfield ended the vigil with one final message: for those suffering from domestic violence, help is available. Those who are in need of assistance are encouraged to contact Harmony House’s 24-hour crisis line at 706-885-1525 for confidential assistance. Harmony House can also be reached at their Shelter Admin Line at 706-885-1526, their Admin Office Line at 706-882-4173, and by email at [email protected]