Slaughter Wins with Perseverance and 23.76 Pounds of “Classic” Bass 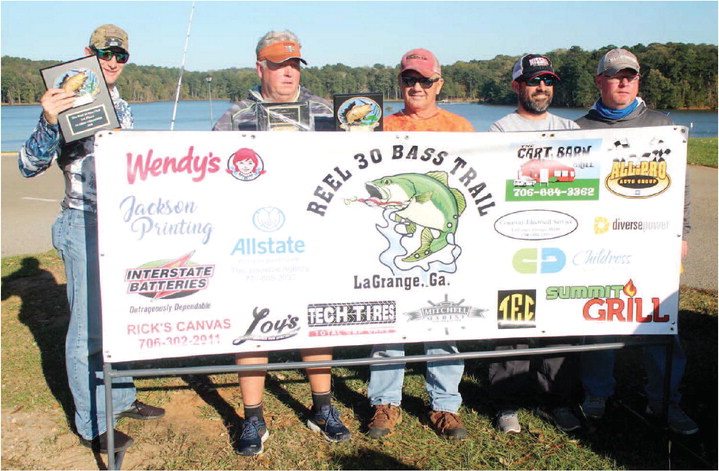 Not everybody is a championship level angler, but Ken Slaughter is.

After years of shining his lures, pushing the envelope and changing fishing spots, Slaughter wrote his name into the bass fishing record book.

It all came together for Slaughter last weekend in the two-day Reel 30 Bass Trail Classic. Slaughter fished smart and hard on Saturday and Sunday as he netted the tournament championship with 23.76 pounds of slippery bass.

And for Slaughter, the friendly sort of angler from Newnan, it was a fishing adventure. The man did his homework, and for one weekend on West Point Lake, he outsmarted the bass.

“A lot of hard work went into this. I get a lot of practice every weekend (on the lake). I went out and competed, and I got lucky,” said Slaughter.

He fished like he meant it, too, especially last Saturday and Sunday. He fished shallow, and he fished deep. And Slaughter caught West Point Lake bass in water between two and 15 feet deep.

Slaughter attached a jig lure to his fishing pole, and fate took over. But so did Slaughter, who lives the bass fishing life every month out of the year.

On one special weekend, however, Slaughter was the numero uno fisherman on the lake. He even caught the two biggest fish in the tournament, which weighed in at 5.15 pounds on Saturday and 5.7 pounds on Sunday.

“I was fishing fast, and the fishing was pretty decent. The spotted bass were biting. And I caught a lot (largemouths, too). I had some fun,” said Slaughter.

He should’ve had a good time after sweeping the tournament and the “Big Bass” honors. Slaughter did not receive a standing ovation, but he did win everything in sight. Slaughter had a payday of $4,110 (“Big Bass” money included).

Slaughter had plenty of challengers, too. Tournament runner-up Dennis Gaddy of Hogansville had a boat full of four-pound largemouth bass. They were weighed, and they were released at Pyne Road Park.

In the two days of the Reel 30 Bass Classic, Gaddy caught 40 spotted and largemouth bass. Gaddy was fishing and catching at a depth of eight to 10 feet.

“I tried a spinnerbait, and they were biting. I went to 50 different spots,” said Gaddy.

LaGrange angler Shane Kennon won some cash, and caught some bass as well. Kennon picked up $950, and he reeled in 19.14 pounds of tournament fish. Kennon was the fourth-place fisherman.

There were more fish to be caught, and Dusty Thomas hooked some of those. Thomas, the La-Grange angler, claimed fifth place in the “Classic” with 19.01 pounds of bass.

Thomas was awarded $600, and he got a Sunday afternoon plaque. Tournament fisherman David Conaway of Valley, Ala. had 14 more catches.

All of his fish were released. Officially, Conaway had 8.08 pounds of classically weighed fish. Conaway took five of his bass to the weighing scale at Pyne Road Park on Sunday afternoon.

“I caught a lot of my fish with different lures. I did a lot more fishing than riding. The fishing was fair to good, and I used my topwater lures a lot,” said Conaway.