By the Numbers: Callaway is a Solid No. 1, Tigers are Ranked 24th 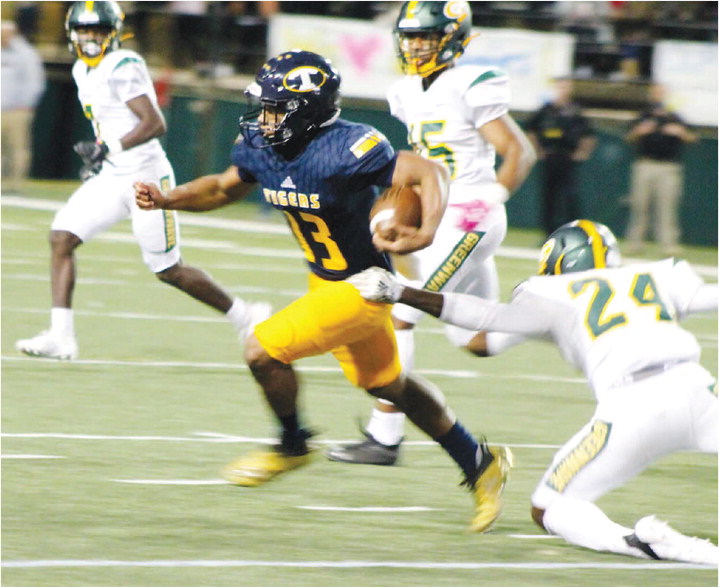 Callaway High School is still the team to beat.

The Cavaliers are also the football team that no one can beat. Callaway High, the little school with the big heart, still has that No. 1 look.

Callaway High is looking for the first state title in school history this year. This is not the most talented Cavalier football team ever, but CHS has proven game-after-game to be one of the grittiest teams in the state.

The Cavaliers have a presence about them, and they have some punishing players. They appear to be good enough to go the distance and a win a state championship ring this season.

Callaway High is a second half team. The Cavaliers have faced deficits and erased deficits this season in the second half of some games. And CHS has won with coach Pete Wiggins. The astute teacher of the game has found some Friday night grinders with senior running back Charlie Dixon, senior quarterback Demetrius Coleman, senior offensive guard Lathan Patterson (6-foot, 275 pounds) and senior twoway stud Jalin Shephard (wide receiver/cornerback).

Coach Tanner Glisson’s Tigers are ranked 24th in the MaxPreps Class AAAA state football poll. Troup High is on a fourgame winning streak. The Tigers are 4-3 overall and 4-1 in Region 2-AAAA.

Todd is averaging 133 yards per game. He breaks tackles and runs over defenders. He also averages 11 yards per carry. Todd has rushed for 937 yards on 79 carries.

Ferguson is hard to bring down, too. Ferguson, small and compact, is a sprinter. He has 535 yards and 75 carries, as well as five touchdowns on the season.

Tucker is a tough hombre as well for the Tigers. Tucker averages eight yards per carry, and has scored five more touchdowns. His backfield running mate, Todd, has seven rushing touchdowns on the year. Troup High is a perennial state playoff team, having made the postseason four years in a row in Class AAAA. The Tigers have lofty expectations this season, too.

LaGrange Police Chief Lou Dekmar has been selected to serve on the independent Task Force...

Higgins at Hunter allen Myhand Zane Anthony Lemoine Infant Zane Anthony Lemoine, of LaGrange, passed away on November 14, 2020. Zan was the son of Thomas Lemoine and Shabria Copeland Lemoine in LaGrange. In addition to his parents, his family includes his grandparents, Nathaniel Copeland and Kathy Lemoine; extended family and friends. The family will have a private service.   Joe...

Early Wednesday morning, about 1:55 a.m., LaGrange Police responded to Lee's Crossing Apartments on Old Airport Road in reference to a case of Entering Auto. Officers arrived and made contact with the victim, who stated unknown person(s) made entry into her locked vehicle and stole her fuse, valued at about $10. The victim stated she heard the alarm going off on her white 2002 Chevy...