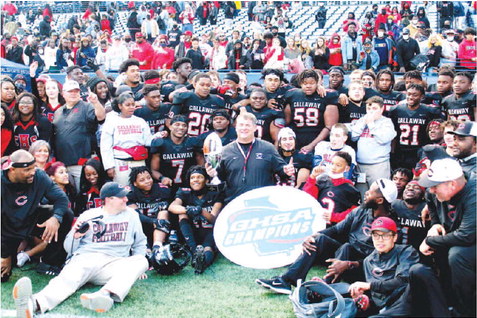 For the first time in the super deluxe, extra special history of Callaway High football, the Cavaliers can now call themselves the state champions.

Jalin Shephard and Callaway High took that next step on Tuesday afternoon as the Cavaliers won the Class AA state title in style with a tough 22-17 victory over the Fitzgerald Purple Hurricanes in the game in Atlanta.

In the neighborhood of 3,000 fans watched the state championship spectacle at Center Parc Stadium. As for Shephard, the senior cornerback for the Cavaliers, he took an active part on this historic occasion for CHS.

And Shephard had no problem describing how the state title felt with the pressure on and the fans glued to every big play, of which there were many.

It was not easy, and Shephard knew it wouldn’t be a cinch. But No. 3 and the Cavaliers played on. And mostly, Callaway High played like state champions for four quarters.

The Cavaliers never had any doubts, so they said.

“We came prepared. We had a good mindset, and we loved being out there,” replied Shephard.

He had the first massive play of the state championship game. Shephard gave the Cavaliers a 2-0 lead with a tackle and safety in the Fitzgerald end zone in the first period.

“Everything that we’ve done (this year) is worth it.

We are on a pedestal,” said Shephard.

The Cavaliers are also on a roll, having won five straight state playoff games. Callaway High is a team that knows how to deliver with the football world watching.

In the second quarter, CHS played on. And the Cavaliers played well. They milked their lead to 8-0 with a diving 40yard touchdown catch from Callaway High junior wide receiver Carlos Billingslea.

Senior quarterback Demetrius Coleman of CHS put the ball exactly where it could be caught. Coleman passed for 88 yards and rushed for 87 yards on 11 carries in the game.

The Purple Hurricanes (14-1) showed some life, too, with a David Vaughan 28-yard field goal with 5:25 left in the first half. Fitzgerald shaved the Cavalier lead to 8-3.

Coleman was not done either. Coleman squirted in for a fouryard touchdown on the last play of the first half. Callaway High took a 15-3 lead.

And after a scoreless third stanza, the Purple Hurricanes made a serious run at CHS as well in the fourth period. Fitzgerald senior running back Chance Gamble scored twice in the final 12 minutes of the game.

That made it a 22-17 game, with the Cavaliers clinging to the lead.

That is not all he did in the contest for the Cavaliers. Dixon played one of his best games ever with 28 carries for 207 yards and one touchdown.

And at the end of the afternoon, Dixon touched the state championship trophy. He also helped to win that Class AA state football title for Callaway High School.

“We bonded, and we played physical,” said Dixon. “And we are feeling good.”

The Cavaliers should be with their first-ever state football title.