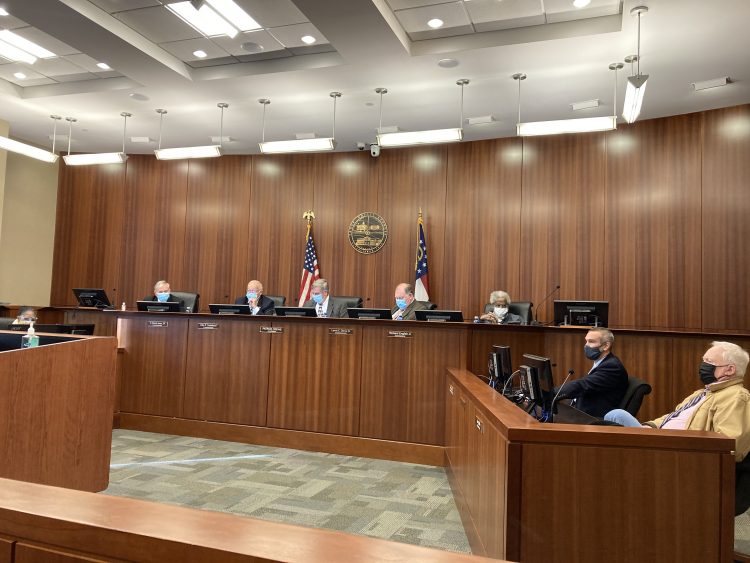 During their meeting on Tuesday, the Troup County Board of Commissioners approved a special use permit to allow for the school system to move forward with its plans to build a new school for the Rosemont area.

The Troup County School System plans to build a new elementary school on two parcels off of Burgess Road and Hamilton Road across from the current Rosemont Elementary School.

In order to use the property for the school, a special use permit and a public hearing were required.

Only one person spoke in opposition to the application, Anthony Decoff, who lives adjacent to the property in the north-east corner off of Burgess Road.

Decoff advised that the school would likely cause problems for his wife who works night shifts as a nurse and sleeps during the day.  He noted that they can already hear children playing and other noise from the current school and that it would only be worse if it’s in their backyard.

Decoff asked that if the school system intends to continue moving forward and not choose another location, as he suggested, that they place a 100-foot buffer around his property for privacy and noise reduction. The county already requires a 50-foot buffer.

Troup County Engineer James Emery said that he expects the school to not use the entire 38 acres of the properties, but site plans for the project have not been started.

Traffic concerns were also raised as schools typically generate large morning and afternoon traffic issues. The county asked that the school system work with county engineers and the Georgia Department of Transportation to ensure that car and bus queues line up on school property rather than in the roadway.

Ultimately, the commissioners unanimously approved the special use permit under the condition that they honor the 100-foot buffer requested by Decoff.

In other business, the commissioners approved a request to replace the aging fire protection system in the Troup County Jail.

Public Services Director Dexter Wells advised during a previous work session that 26-year-old system is at the end of its useful life and needs replacement.

The commissioners approved the purchase of a replacement fire protection system from Siemens at a cost of $223,850. The new system was budgeted and will be paid for using special-purpose local-option sales tax (SPLOST) funds.

The new system is expected to save the county about $8,900 annually out of the $23,500 per year they were already paying to maintain the system.

The board also approved funds to purchase a compressor system to replace the system that the Troup County Fire Department uses to fill up oxygen tanks. The system will be purchased from MAKO in the amount of $56,300 using SPLOST funds.

Commissioners also approved a request to apply for the State Delinquency Prevention Grant for juvenile court. The funds would support the Children in Need of Services (CHINS) program the Strengthening Families Program. Up to $20,000 in funds could be granted for the first year and $30,000 for subsequent years.

The commissioners also approved a request to lift the hiring freeze for a budgeted vacant position in the solicitor’s office for a legal assistant.

The commissioners also signed off on a manufactured home placement at 3960 West State Route 54 Highway and a beer and wine application for New Airport Food Mart.

A public hearing was held for an entertainment II establishment application for The Hooch Hideaway at Highland Marina. The application was not vote eligible, but could be approved at the next Troup County Commissioners meeting.

The commissioners also voted to continue a public hearing on a rezoning application for 2 & 3 Short Street after there was discussion of whether the county actually owns the roadway.