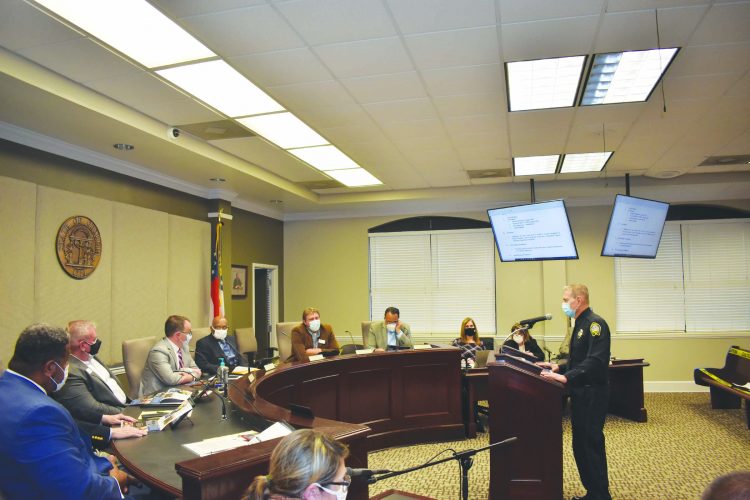 As was previously reported, the homicide rate significantly increased over the last year. In 2020, the City of LaGrange had seven murders, a total it hadn’t seen in over 20 years.  Although only up three incidents from the previous year, the city hasn’t had seven murder homicides since 1997.

Dekmar noted during a previous council work session that violent crime rates have increased across the country during the pandemic, not just LaGrange. He attributed much of the increase on violent suspects being allowed out of jail or prison by courts and parole boards wanting to minimize jail populations due to the pandemic.

Dekmar said many of the suspects and victims involved in the recent murders had previously been arrested dozens of times, including one who was arrested 38 times, but they were given bond or released on probation or parole.

More than half of all violent and property crimes in the city were on parole, probation, or bond when they committed the additional offenses.

Most of these early releases are being done at the state level, which is why Dekmar asked the city to send a resolution to the state legislature asking them to consider the ramifications of early release and be more selective on who is allowed out of prison.

Even though crime is up across the county, the LaGrange Police Department beat the national clearance rate in basically every violent crime category. Of the seven murders in 2020, five have been cleared, bringing the local police department’s murder clearance rate to 71 percent.

Although many crime categories saw increases in 2020, the ones that went down are possibly the most troubling. Reports of domestic violence, child abuse, and elder abuse dramatically dropped in 2020. Over the last two years the police department has investigated about 300 child abuse cases each year. Over the past year that number dropped to 190.

Dekmar noted that they don’t actually believe fewer abuse incidents are occurring. Instead, they believe these cases just aren’t being reported because children aren’t going to school as they normally would and people are working from home due to the pandemic. Because of this, police are further emphasizing the importance of reporting any indications of abuse.

Dekmar also reported that about two dozen officers have been affected or had to quarantine because of COVID-19. For the most part, the cases were staggered enough so that police services were not impacted—although at one point they were down to only two investigators and the chief to respond to a homicide.

Despite this, only 30 percent of officers have sought inoculation for the virus, which has been available to them as first responders, much to Mayor Jim Thornton and Dekmar’s chagrin. So far, the chief has tried to encourage officers to take the vaccine without making it mandatory.

“It’s frustrating to me that people who are eligible for the vaccine are, for whatever reason, choosing not to take it,” said Thornton. “I think this is going to be the only thing that stops the spread of COVID and gets us back to some sense of normalcy.”

Councilman Dr. Tom Gore echoed these sentiments by voicing frustration at people choosing to not take the vaccine. He said he has had far too many people asking him if they should take it and that his answer is a resounding yes.

“This is the only thing that is going to get us to that point,” said Gore. “We’d all be a lot better off if everybody takes it.”

Gore noted that during his experience as a medical professional, he’s only seen a very few mild reactions to the vaccine, nothing compared to the potential death from catching the actual virus.