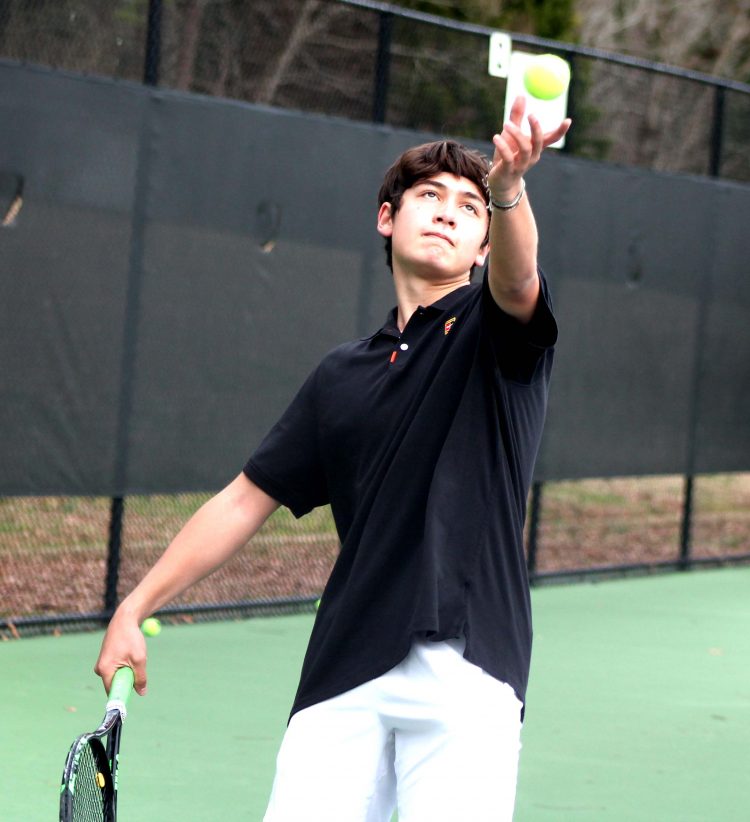 One way or the other, they were going to find a way.

The Grangers stopped at nothing less than that. They went the extra mile and made one more shot than their opponent.

It was that kind of a day for LaGrange High in a closer than expected 3-2 boys tennis win over the Newnan Cougars on Tuesday afternoon at the sunny McCluskey Tennis Complex.

“It was kind of tense, and we got nervous,” said LaGrange High sophomore Towson Partin.

He and fellow sophomore Luke Patton of LHS made all the difference in the boys No. 2 doubles match. The team victory also depended on Partin and Patton.

They are the “P&P” tennis connection. Patton and Partin were in it for the long haul. They showed some poise and some uncanny shots in a 6-3, 2-6, 10-5 win over the Cougar doubles team of Clay Williamson and Harris Bass.

Partin and Patton beat the two Newnan seniors as the afternoon turned into night. Patton and Partin inhaled all the air in the tennis facility.

“We played aggressive at the net. We had some good, strong forehands. We played clutch (tennis),” said Partin.

And he hit the match-deciding shot in the tie-breaker.

“I stayed calm. I stayed consistent, and I hit a volley at their feet,” said Partin.

The LaGrange High boys also won a tough match at No. 1 doubles. Granger seniors Baker Skinner and Yongjin Shin kept the ball moving and slicing in a 7-5, 6-3 victory over the Newnan sophomore doubles team of Jaret Webb and Robert Ward.

“We had strong serves, and we were more aggressive at the lines. We placed the ball well,” said Skinner.

The Grangers won another match at No. 1 singles with sophomore sensation Pierce Manning. His big serve, all 115 MPH of it, carried him to a 6-0, 6-2 win against Cougar senior singles player Turner Scarborough.

“I had a lot of movement and a heavy forehand (shot). I had some decent aces. I don’t want to sound cocky, but I have a good serve. I kept working hard,” said the 6-foot-1 Manning.

LaGrange High lost its other two boys singles matches – with freshman Wesley Minicozzi at No. 2 and senior Yohan Yoon at No. 3. Yoon was swept by Newnan’s Reese Robertson, 0-6, 0-6.

“He was a good player with a lot of topspin. I need more consistency and more experience,” said Minicozzi.