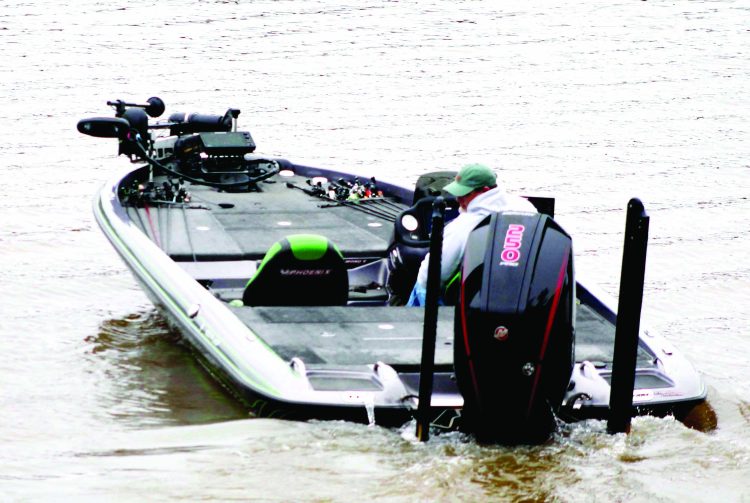 He had the boat.

He had the fish, and he had the game-winning plan. Danny Lavoie had a pretty good idea how it was supposed to be done, too.

He knew where to go. Lavoie had his game face on.

“I fished the banks and the brush piles. I fished the mouths and the points (of the creeks),” said Lavoie, the diehard fisherman from Franklin.

What that got Lavoie on Sunday afternoon was tired and cold. He also caught a bag full of largemouth bass on West Point Lake.

It was overcast, but encouraging. The rain stopped, and the fish were circling the lake.

Lavoie caught a 4-pound largemouth and a couple of 3-pound bass. The angler also pulled in eight largemouth bass in all.

“I covered a lot of water. I love the dang pull of the bass. You just have to tire them out. And you have to be patient,” said Lavoie.

He also had one other near-catch of a largemouth bass that weighed between 3 and 4 pounds. He swam off with a splash.

But he also caught a bunch of other largemouth bass on crankbait and jig lures. Lavoie fished in water between two and 10 feet.

The water temperature was tolerable, between 50 and 52 degrees. And Lavoie kept on reeling in largemouth bass.

That is not something new for Danny Lavoie. He has been around the fishing block and then some. He is an experienced angler.

“I fish in tournaments, and I’ve been doing that for 45 years. I have won around 25 (bass events),” said Lavoie.

He is a regular money winner on the West Georgia Bass Trail and the Alabama Bass Trail. Chad Hendrix of Hogansville also had some weekend good fortune.

Hendrix caught seven crappie (1-pound each) with a jig lure. Hendrix spent four hours on the lake with his son, Mason.

“It was rough and cold. We had some luck. You do have to be on top of them,” Hendrix said of the crappie on West Point Lake. “We just like to fish.”

Team Hendrix caught their crappie at a depth of 14 feet. All seven of the crappie were released.