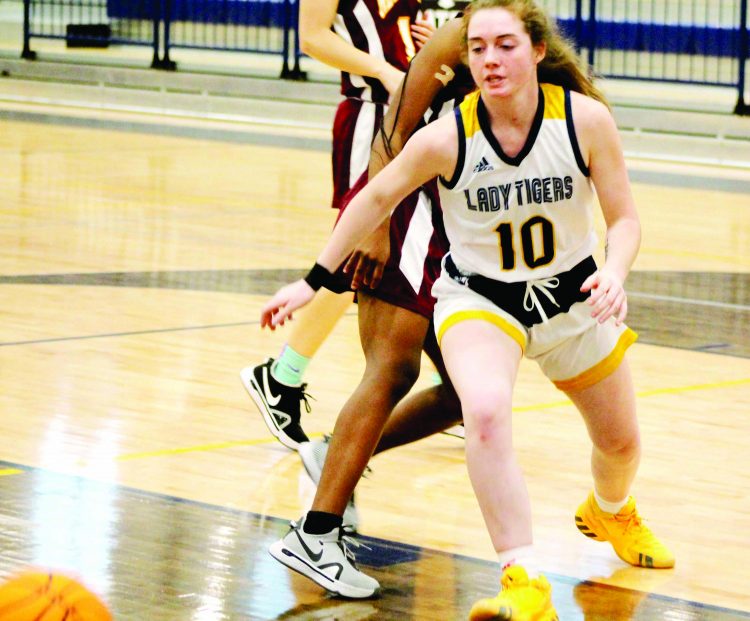 The Lady Tigers were well aware of that and so much more as they waxed New Hampstead, 80-38 in the first round of the Class AAAA Girls State Basketball Tournament on Wednesday night on the Troup High home floor.

Coach Carla Thornton’s Lady Tigers played like a team that had a sense of urgency. Troup High cleaned the backboards, dominated the lanes and played with some Lady Tiger quickness.

“We had more defenders and more energy. We had teamwork, and we had some confidence,” said Thornton.

The press, whether half court or full court, worked just about every time for the Lady Tigers from Troup High. They know how to play some dastardly defense.

“We stole the ball. We passed the ball. We got rebounds and putbacks,” said the 5-foot-11 Alexcia Murphy of Troup High.

The Lady Tigers played a fast, rowdy and rough game at the expense of the New Hampstead Lady Phoenix. Troup High played a high-energy first period as it outscored the team from Savannah, 21-7.

Murphy had the first blocked shot of the game. Troup High junior guard Samarria Weldon scored the first layup of the night. And Murphy played with some basketball intensity as she scored on a putback, a layup and with three free throws in the first quarter.

Lady Tiger freshman guard Angie Dowdell also scored on a fast break layup, as well as with an eight-foot field goal. And with a four-foot hook shot from Samarria Weldon, Troup High took a 20-5 lead.

The game had a definite Lady Tiger flavor in the second period, too. Troup High put its track shoes on and hustled to a 47-14 lead. The Lady Tigers outscored New Hampstead, 26-7 in quarter No. 2.

“Troup is very athletic. They play great defense. They had a height advantage, and they took the (right) passing angles,” said head coach Rico Campbell of New Hampstead.

In the second period the Lady Phoenix got a little something going with a layup from Adiah Gray and a steal and bucket from freshman star A’kara Jackson.

New Hampstead reduced the Lady Tiger lead to 27-11 with 5:28 left in the first half. But a mountain of points followed for Troup High as it scored with an Alexcia Murphy low post pivot and basket, along with a Jada Green layup and a Samarria Weldon field goal.

Palmer also buried a three-pointer at the 7:11 mark of the third quarter. The Troup High lead ballooned to 52-14.

The Lady Tigers got another three-pointer from senior guard Emelie Reed with 3:04 left in the third period. Reed gave Troup High a massive 60-21 lead.

The Lady Tigers improved to 13-5 on the season. The New Hampstead Lady Phoenix dropped to 4-11. New Hampstead did get nine points from senior guard Makenzie Williams.

As for Troup High, it now advances to a second-round state tournament game against Bainbridge on Friday night at THS. The contest will tip off at 6 p.m.