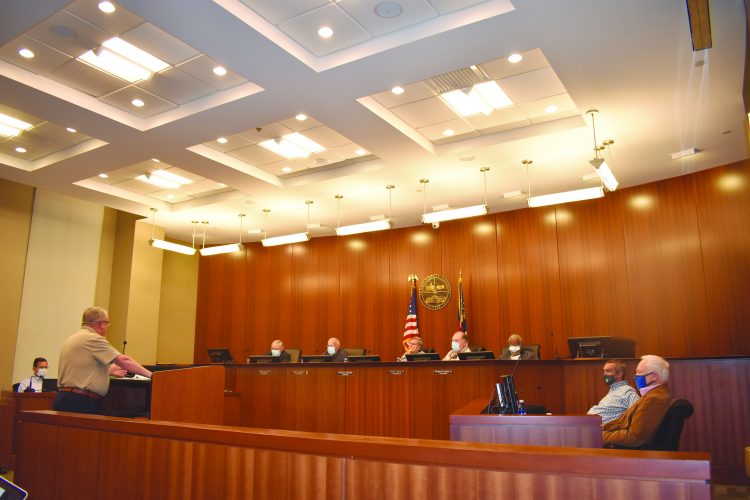 During the Troup County Board of Commissioner’s work session on Thursday evening, county officials held an in depth discussion on the littering problem and potential solutions.

Commissioners noted that they frequently receive complaints from residents about trash along Troup County roadways and asking what’s being done about it.

For many years, trash was picked up primarily by inmates from the Troup County Correctional Institution, but it was closed in 2017 due to the costs to house state inmates rising above what the state was willing to pay to hold them.

Cutting the prison was estimated to save the county about $1.57 million per year, but it also left them without a large number of workers to mow and clean local roadways.

Starting with this fiscal year in July 2020, the county began to contract with private companies to mow and pick up trash on county roads.

County Engineer James Emery advised that they determined that the progress made by the original company contracted to mow and pick up trash was not sufficient. After several months, they had only completed mowing on about half of the county, so the Board of Commissioners voted to end the contract and move onto a new company, which is going well so far.

The new company, Amazing Scapes, appears to be doing a much better job. After only three weeks, the company has completed litter pickup on 107 miles of Troup County roads.

Emery advised that the county pays $29 per mile for litter pickup, which he felt was well worth it. On one road alone, they picked up 60 bags of trash, he said.

Now that the work camp is closed, smaller crews of inmates incarcerated at the county jail pick up as much litter as they can, but it doesn’t take long for trash to be back, advised Sheriff James Woodruff.

“We pick it up, but a week later it’s just as bad,” said Woodruff. He noted a crew of six people (five inmates and one officer) recently picked up more than 100 bags of trash off Towns Road, but two days later the litter had returned as if nothing had been done.

Woodruff suggested allowing work-release inmates, who leave the jail during the day to work their jobs, but return at night, be allowed to pick up trash on weekends to help pay for their room and board. Work-release inmates currently pay $165 per week for room and board. Woodruff proposed allowing the inmates to work off their housing fees at $10 per hour, so if they work eight hours a day on Saturday and Sunday picking up trash, they would only owe $5.

“They would only be paying $5 per week to stay in work release, so your revenue would greatly decrease, but hopefully the number of participants would get more roads picked up,” said Woodruff.

Deputies also recently began overseeing crews picking up trash around West Point Lake. Over the past two weeks, 165 bags of trash were picked up around the Roanoke Road Bridge.

Woodruff says he has received many complaints about trash coming off of trucks coming to and from the landfill, but unless it is directly witnessed by law enforcement, it’s difficult to prosecute. That’s why the sheriff’s office has partnered with other law enforcement agencies to hand out flyers at checkpoints asking drivers to secure their load so that trash doesn’t blow out the back of their vehicles.

Woodruff also suggested following the footsteps of the City of LaGrange with their Leaving LaGrange Better than We Found It initiative. He suggested allowing county employees to volunteer to work one Saturday a month to pick up trash, much like LaGrange.

The Troup County Sheriff’s Office has also adopted a mile of roadway in the county to help keep clean, which Woodruff suggested other county departments could do.

When asked about punishment for littering, both Woodruff and Troup County State Court Judge Wesley Leonard chimed in saying that littering is notoriously difficult to prosecute.

Woodruff advised that he simply doesn’t have the manpower to monitor sanitation trucks, so unless they directly see someone throwing out trash, not much can be done.

Judge Leonard said he believes much of the trash isn’t just being thrown out of car windows anyway. He noted that much of the trash along roadways that he sees isn’t fast food cups, it’s dog food bags, mattresses, and other items headed for the landfill.

The judge suggested a plan that could have probationers serving their community service by picking up litter as soon as Apr. 24. Rather than using a bus to transport the probationers, as has been done in the past, Leonard suggested starting from staging areas, such as empty parking lots around the county, rather than transporting everyone on a bus due to COVID.

But ultimately, the lack of inmates picking up trash isn’t the problem, he said.

“This is not an inmate labor problem, because inmates can be out there on Thursday and work all day, and when you go back there on Monday, it’s almost as bad,” noted Judge Leonard.

Litter is a problem for many communities throughout Georgia, noted Commission Chair Patrick Crews.

“It seems like the only way we are going to be effective is to pick it up,” said Crews. “The root cause of this is just people who are careless and throwing stuff out the window.  If we don’t do something to get to the mental, psyche of those individuals, they’re just going to keep throwing trash out.”

But trash pickup comes with a cost, whether by inmates or contracted labor. Crews noted that when people complain about litter he often ends up having to ask them, “How much of your money do you want me to spend picking up other people’s trash?”