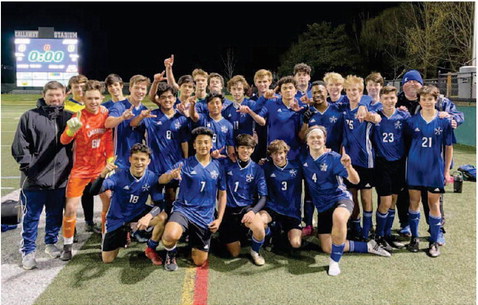 In a matchup that came down to the final buzzer, the LaGrange High boys soccer team defeated Columbus 1-0 to secure their latest region championship title. Following a scoreless—and tense— first half by both teams, the Grangers scored the first and only goal of the game with 19:55 seconds left to seal the victory.

Jan Alvarado scored the goal with an assist by Tripp Hollstrom to put fears of overtime—temporarily— to rest. The Grangers weren’t out of the woods yet, however, as a fiercely-competitive Columbus team raced across the field in an effort to tie the game. A stout Granger defense preserved the shutout, despite being on the ropes for much of the first half.

LaGrange expected a tough game. Heading into Thursday’s matchup, the Grangers boasted a #10 ranking—five spots below #5 Columbus. Following their win over Kendrick last week, LaGrange Coach Shane Pulliam reminded his players to stay conditioned and in shape ahead of the championship game.

The reminder paid off— but the Grangers had to overcome a slow first half offensively.

“We kind of drug for a little bit,” Pulliam said. “We had to change things up.”

This change included having his players run faster—and a change in formation.

“I told them at halftime, ‘Look, we’re just not running very good,’” he said. “’It’s like we’re running in mud and not moving very fast.’” The longtime coach made the game-winning adjustment.

“We went to two strikers up top,” he said. “I think that really caught them because instead of just having that one guy where we weren’t getting up there fast enough to support him, he had somebody he could turn and play through to, and we finished.”

“That was exciting to see it come together and work like that,” said Pulliam, before offering additional praise for Alvarado. “He’s somebody that scored two goals in the last game, and he’s really started coming on here recently … Tripp created as the leading assist guy and [Alvarado] finished just like he was supposed to.”

An enthusiastic Alvarado celebrated with his team following the Grangers’ region victory.

For other Grangers, however, the win serves as their third in a row— something Pulliam is quick to explain.

“I look at it like it should be three in a row,” said Pulliam. “We were the number one team in the region last year when it all stopped, and we led in every category in the statistics.”

With a win over Columbus and a region title under their belt, the Grangers are expected to move up in state rankings. Despite this, they face tough competition in the weeks to come ahead of Spring Break—including a showdown against #10 Auburn at home next week.