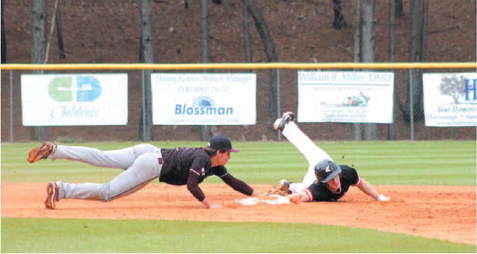 When the game is on the line, the Cavaliers are always at their best.

That has been the baseball theme so far this season. Nothing much changed for the hard-charging, free swinging team from Callaway High as it stormed back for a 5-3 win over Heard County on Tuesday night in a Region 5-AA game in Hogansville.

The lead did change hands three times on the night. But that is to be expected in a Callaway-Heard County baseball game. The teams don’t like each other.

“This is a great rivalry game. The guys are going to battle,” said Heard County head coach Trent Bianco.

Moore and the 6-foot-2 Cornelius were throwing strikes and getting outs. Moore had six strikeouts in the game. The pitchers were rolling right along until the top of the fourth inning.

Heard County finally broke the ice and took a 1-0 lead on an Isaiah O’Neal double, a sacrifice bunt and a Callaway High fielding error.

The Cavaliers got on the board as well in the bottom of the fourth inning. Moore walked, and C.J. Stephens singled for Callaway High. The Cavaliers also got a go-ahead two-run double from senior first baseman Kaden Rogers.

“We’re a scrappy team, and we know how to compete. We are confident,” said Rogers.

The Heard County Braves were jumping through some hoops, too. They deadlocked the game at 2-2 in the fifth inning behind a Chance Brown two-out single and stolen base, followed by a Drew Cornelius RBI single to left field.

Heard County would score again in the top of the sixth to take a 3-2 lead. The Braves had the momentum, but not the game despite getting an Isaiah O’Neal infield hit and a stolen base, along with a Will Alford run-scoring single of the infield variety.

Callaway High had a sixth inning uprising, too. In the bottom half of the inning the Cavaliers scratched their way back for a 5-3 lead. And all three runs were scored with two outs.

Justin Moore and C.J. Stephens started the rally with back-to-back singles after one out. Bryce Hubbard then flied out, but Kaden Rogers came back with an RBI single to tie the game at 3-3.

And Eli Freeman tacked on a two-RBI single to give the Cavaliers a 5-3 advantage. And CHS protected that lead.

“We showed some composure. We took some good at-bats, and we showed the ability to come back,” said Callaway High head baseball coach Dusty Hubbard.

“We played pretty good. We swung the bats, but we made some errors,” said Braves slugger Isaiah O’Neal, who went 2-for-3 with one double and a single.