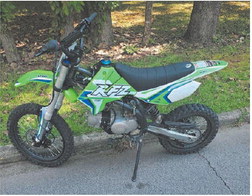 charged a juvenile with sev-

eral ouenses as part of the

Saturday night, about 8:30 p.m., ovcers from the La Grange Police Department observed a subject illegally riding a dirt bike in the roadway in the 800 block of Forrest Avenue.

the rider, the operator of the dirt bike laid the bike down

and fled from police on foot,

but they were later apprehended.

An unnamed juvenile was

identified as the operator

of the dirt bike, who was charged with Obstruction of

The juvenile was cited for the ouenses and the dirt bike

charged an adult during a similar incident on Aug. 25 Juvenile Charged with Obstruction for Dirt Bike

minimum of $150 to get the vehicle back, which does

not include storage fees.

within the streets of La-Grange. Not only are these riders a nuisance to other legal drivers, they are dan – gerous to both themselves

Police have received nu merous complaints from citizens about people riding dirt bikes lawlessly through the streets of LaGrange, frequently in groups. These riders often drive reckless ly through intersections,

popping wheelies, and even

taunting police to chase them.

Police say these dirt bike riders are usually adults and

are believed to often come

from outside LaGrange, but

are sometimes juveniles, as