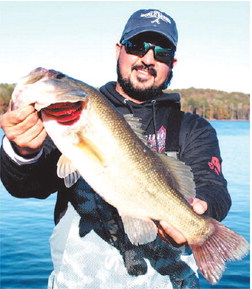 There was no better place to be than in the boat and on the lake.

It was a catch-and-release sort of morning and afternoon on the lake. Jordan and Utley took turns catching 2-pound largemouth and spotted bass.

"You have to fish hard, and you have to keep on cranking. My bass were hit- ting a Texas Rig," said Ut – ley.

The 2-pounders were being caught from 1 foot to 15 feet.

"I've been fishing West Point Lake for 15 to 20 years. This is a good lake," said Utley. “Some of my fish felt like they were on the rocks. My pole was bending over." Jordan, the other Metro Atlanta fisherman aboard the boat, had some good luck, too. Jordan chose the same kind of lure, and he also caught some bass shallow and deep with his Texas Rig.

“The wind was blowing

Big boy bass are being caught every week in LaGrange on West Point Lake. Most of the largemouth species are taken with artificial lures.

Pyne Road Park is where Charles Utley and Charles Jordan prefer to fish out of. Jordan and Utley caught 14 spotted and largemouth bass last Friday morning and afternoon on West Point Lake.

15 to 18 (mph), but this lake was producing some dierent kinds of fish. You just have to set the hook and be patient," said Jor –

As for the thought of releasing 14 bass, which would have been rather tasty with some cole slaw and hushpuppies, Charles Utley had no regrets.

– lease because we want the bass to grow and get big – ger," said Utley.

The bass will feed and add some pounds on West Point Lake. The largemouth and spots will also live for another fishing day, come rain or fog on the lake.

West Point has some loyal anglers, too, like the two Charles's, Utley and Jordan. They will be back and cranking on another lovely fishing morning and afternoon out of Pyne Road Park in LaGrange.

The sunshine will be waiting, along with the largemouth and spotted bass.

West Point Lake is a good place to strike up a conversation and to fish. The largemouth bass are being caught on Texas and Alabama Rigs.