Chipper Willis Has a Baseball Name and a Crushing Game 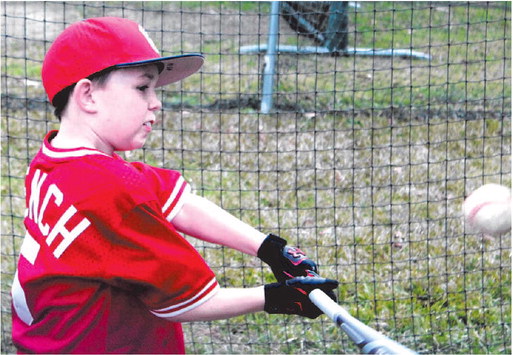 When your first name is Chipper, you're supposed to be good.

That just happens to be the case for Chipper Wil – lis, the 8-year-old baseball player from LaGrange. Willis would just as soon play through rain, sleet or a 90-degree day in order to get another inning of base – ball.

"It's fun, but you have to work (at it). I like to catch, and I can hit the ball hard. I can field ground balls," said Willis.

He is no ordinary baseball player either. He was named after Atlanta Braves Hall of Fame third baseman Chip – per Jones.

Hence, the name, Chipper Willis. He isn't yet a Hall of Famer like his namesake. But Willis does have a lot to live up to and play for.

Chipper Willis is a level swinger and a hard hitter. The local youngster has played organized baseball for four years.

“I’m a shortstop. I wear No. 5. I’ve been playing baseball for four years, and I’m good,” said Willis, who is far from timid.

He played no less than two league seasons this year in LaGrange. Willis started for the Grasshoppers in the spring, and he played to his heart’s content last fall, as well, for the Athletics in the Recreation Baseball League.

“Chipper loves baseball,” said his dad and Youth League coach Jason Willis. “Baseball is helping Chipper grow up. He is a part of a team. He lifts weights, and he can throw and catch.”

The 8-year-old infielder can drive the baseball crazy with extra base knocks. Willis has good timing and a fast reaction.

He can see the ball coming even before it gets there. Willis anticipates well. He expects to drive in runs and usually does, whether playing for the Athletics or the Grasshoppers.

And the second coming of Chipper Jones would make the former Braves great pretty proud. Every day, actually.

The two Chippers are alike, especially the second grade version in LaGrange.

“My son is getting bigger. He makes solid contact, and he wants to work. He has a work ethic,” said James Willis.

He doesn’t make his son field those grounders and hit those line drives either. Chipper Willis wants to practice and play baseball even during the ou season.

Father and son were back at the Harris Baseball Complex for another set of swings in the batting cage on Tuesday afternoon. They worked out for an hour or so.

“We throw, catch (and hit) three or four times a week. A baseball player is only going to be as good as he is willing to work,” said James Willis, the former second baseman for LaGrange College and Central Alabama Community College in Alexander City. As for his son, Chipper Willis, he has a great role model and an equally good first name. Willis is a base ball kid full of energy and some homemade baseball skills.

And he loves uniform No. 5.

Baseball is more than a game to youth standout Chipper Willis. Baseball is a lifestyle for Willis, who works out all year long. Willis is in second grade.

Shortstop Chipper Willis was back at the baseball park on Tuesday afternoon. The LaGrange 8 year old is a Recreation League star.